The Guess Who
1969
Canned Wheat 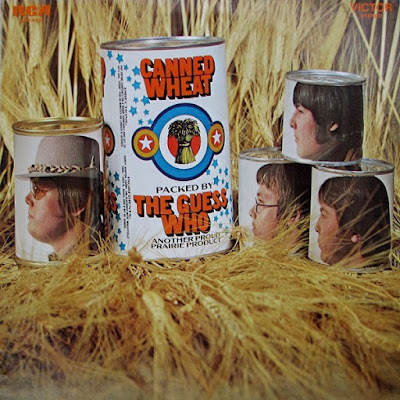 
Canned Wheat is the fifth studio album by Canadian rock band The Guess Who. It peaked at #91 on the Billboard Pop Albums chart.[1] Two of the band's hits were taken from the album: "Laughing" and "Undun". The album also includes a version of "No Time" which would later be re-recorded for their American Woman album and released as a single.

As far as late-'60s and early-'70s rock bands go, the Guess Who has been both blessed and cursed. Blessed because their songs are still played quite frequently on oldies radio stations, cursed because they're only remembered for those songs. Truth be told, the Guess Who was a darn good rock band: Burton Cummings's great rock & roll voice -- similar in power to Bad Company's Paul Rodgers -- keeps even the most overdone Guess Who song fresh, and Randy Bachman's underrated guitar work always serves the song's needs. "Undun"'s wonderful, jazzy riff, which fits the song perfectly, is associated with the overall sound of the Guess Who, not Bachman. 1969's cleverly-titled Canned Wheat introduced several of the band's most remembered songs: "Laughing," "Undun," and "No Time." The album also has six other keepers, including the mellow "6 A.M. or Nearer," complete with jazzy guitar and flute, and the lovely ballad "Minstrel Boy." The original version of "No Time" is fun, even if it isn't radically different; little nuances, like the fade out, shake the listener out of the "I've heard this song a thousand times" syndrome. There are a couple of throwaway bonus tracks, "Species Hawk" and "Silver Bird," that are nice to have, even if they aren't up to the other material. The liner notes are helpful, and it's funny to learn that radio stations ordered copies of "Undun" for airplay, not realizing that it was the B-side of "Laughing." Canned Wheat still sounds incredibly fresh, a product from the heyday of classic rock. For those who want to dig beneath the band's "oldie" status to find the real thing, this album shouldn't be missed.
Posted by Zen Archer at 5:48:00 PM