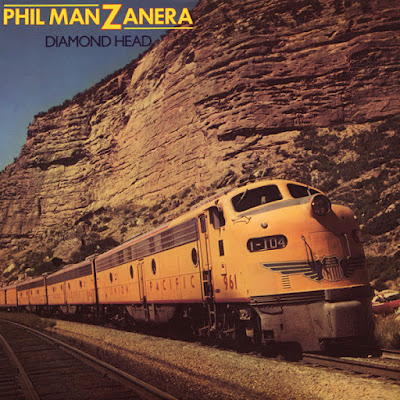 Phil Manzanera was born in London to a Colombian mother and English father, and spent most of his childhood in different parts of the Americas : Hawaii, Venezuela, Colombia and Cuba. It was in Cuba that the young Manzanera, aged six, encountered his first guitar, a Spanish guitar owned by his mother. Phil’s early musical accomplishments were Cuban folksongs learnt against the upheaval of the Cuban Revolution.

In Venezuela the eight year old Phil started experimenting with the sounds of the electric guitar, a cello electric. During his teenage years Phil was absorbing and marrying the twin influences of 60’s rock and roll with the Latin-American rhythms of the merengue, cumbia and particularly the boleros of the Mexican, Armando Manzanero.

Manzanera was determined to join a professional band and by the New Year of 1972, aged 22, he had joined the recently formed Roxy Music as lead guitarist - the line-up at this time was Bryan Ferry, Brian Eno, Paul Thompson and Andy Mackay. Roxy’s rise was meteoric, with the band being hailed as the stylistic influence of the early 1970’s. During the next 12 years, until 1983 when the band members went on a 'long break’, Roxy Music released a series of international best selling albums, achieving ten UK top ten albums and touring extensively throughout the world. In parallel with Roxy Music, Manzanera has alway pursued solo projects, both recording his own albums and producing for others. All his previous solo albums have been digitally remastered and re-released with new artwork, available on his own label, Expression Records through his web-site, www.manzanera.com.

As a writer, producer and solo artist, Phil Manzanera has worked with many of the luminaries of modern music, such as Steve Winwood, David Gilmour, John Cale, Godley and Creme, Nico (Velvet Underground) and John Wetton (King Crimson, Asia). He has co-written material with many artists, including Brian Eno, Tim Finn, Robert Wyatt and David Gilmour. Manzanera co-wrote Pink Floyd’s single 'One Slip’ from their 1988 'Momentary Lapse of Reason’ album. In 2008 Manzanera co-produced David Gilmour: Live in Gdansk as well as David Gilmour’s 2006 chart topping album, On An Island, he also toured with Gilmour playing concerts in Europe and North America. Also in 2008 his production of Enrique Bunbury’s album Hellville DeLuxe,was no1 in Spain and Mexico enabling Bunbury to play the biggest ever concert in Mexico city to 120000 people.

Manzanera has performed in concerts all over the world, including 'Guitar Legends’, the five day guitar festival in Seville where he was musical director for the event as well as playing with Bob Dylan, Keith Richards, Jack Bruce and Richard Thompson. Phil has also played in Mexico, Argentina, Colombia, Cuba, Spain, France Italy and the UK, including a ten date European tour with the Cuban band, Grupo Moncada. He played in WOMAD festivals in South Africa, Australia and New Zealand. Phil ended the 20thCentury by appearing with Bryan Ferry at the British Gas Millennium Concert at Greenwich, the first time they had performed together in 18 years.

The Roxy Music 'long break’ came to an end in 2001 with a critically acclaimed, sellout 52 date world tour, featuring Bryan Ferry, Phil Manzanera, Andy MacKay and Paul Thompson. The world rediscovered Roxy Music and the band were shown to be as relevant and influential as ever. In the Summer of 2003 Roxy played 10 dates in the US followed by 13 European gigs in 2004, including performing at Live 8 in Berlin. After a five year wait, Roxy fans will be able to see the band this Summer in Festivals in the UK, Europe and Japan.

Phil Manzanera defies easy musical definition, preferring to continually explore new musical directions and experiment with sounds and styles, continuing Phil’s musical journey, one that takes many twists and turns , and shows his enduring passion and talent for making music.

Phil Manzanera's first post-Roxy foray into solo albums is a terrific all-star affair that still holds up enormously well. Calling on favors from Roxy members present and past, and those from the Cambridge/British art rock scene, Manzanera assembled a supergroup for every song. Robert Wyatt sings Spanish gibberish on the opener "Frontera," a rewrite of his own "Team Spirit." Brian Eno teams up for the sunny "Big Day" and the nonsensical "Miss Shapiro," both of which would not have been out of place on his own early solo albums. John Wetton (of several groups including Family and Asia) sings a duet with Doreen Chanter (of the Chanter Sisters and the Joe Cocker Band), and Bill MacCormick of Matching Mole and Quiet Sun sings his own "Alma," the album's closing ballad. Fans of any of the singers above, not to mention Manzanera, whose party this is, won't be disappointed. A majority of these tracks went on to form the set list for 801 Live.

The original album featured nine songs, all composed totally (or in part) by Manzanera. From the Spanish language “Frontera” to the soaring instrumental of the title track, Diamond Head was both a showcase of Manzanera’s talents as a guitarist, composer and arranger. But it also served to show that he could create some damn good songs.

The one thing Manzanera didn’t do on Diamond Head was sing: he left the vocal duties in the capable hands of Robert Wyatt, Eno, Wetton, Bill MacCormack and others*. On tracks like the infectiously poppy “Big Day,” Listeners would be treated to the multiple-overdubbed singing of Eno; Manzanera concentrated on creating catchy guitar parts with innovative sonics. While about half of Diamond Head was comprised of instrumentals, the record was far from a guitar-wank excursion. Fascinatingly varied, the album included the funkified “The Flex,” featuring some tasty sax work from Jobson, and — as always – fascinating sounds from Manzanera’s guitar arsenal. The Latin flavor he’d explore in subsequent outings was already evident even on this early work.

Diamond Head was reissued in 2011 with bonus tracks (more on those forthwith). The album mixes progressive styles with proto-world music, art-rock and other styles. More commercially-oriented than Eno’s solo work, it’s occasionally every bit as adventurous. And it’s as close to an ego-free outing as could be imagined for a solo record: Manzanera affords his mates plenty of space to do their things. Wetton’s lead vocal on the tricky-beat “Same Time Next Week” (actually a duet with Doreen Chanter) is almost as musically off-kilter as King Crimson, yet it is somehow rooted in pop styles alien to that group.

Eno’s contribution to “Miss Shapiro” helps create an arty rocker that one-ups the Roxy Music approach; whether it’s Eno’s perfectly dispassionate vocal, the corkscrew guitar lines of Manzanera’s axe, or the whip-smart playing of the rhythm section, the song offers something for everyone. Manzanera’s heavily phased guitar is a major feature of “East of Echo,” a track featuring Quiet Sun. Notably, the timeframe for recording and mixing Diamond head was a mere 26 days; even more notably, during that period Manzanera and his Quiet Sun pals also recorded another album!

“Lagrima” is built around backwards Spanish-styled acoustic guitar, with evocative oboe playing from Andy Mackay. The soaring “Alma” features a Bill MacCormack vocal plus a Leslie’d guitar and some subtle string synthesizer work from Manzanera and Jobson.

The 2011 reissue of Diamond Head offers up a digipak, a lovely and informative booklet, and a pair of bonus tracks. “Carhumba” features a group of African musicians playing in a Latin style, with a searing Manzanera solo (of course). The song tips Manzanera’s hand toward his abiding interest in what is now called world music; had it been released in, say, 2002 instead of 1985, it could have been a hit. “Corazon Y Alma” is a lengthy piece — a demo of sorts – predating the Diamond Head sessions; it explores many of the musical themes fleshed out on the album proper. It marks one of the few notable uses of Farfisa organ (courtesy of Quiet Sun’s Dave Jarrett) in a jazz-prog setting. The song sounds a bit like Caravan, not surprising in light of Quiet Sun’s pedigree.

No catalog of progressive music should be considered complete without a copy of Phil Manzanera’s Diamond Head, and if you’re not going to track it down on vinyl, the 2011 reissue is the one to get.