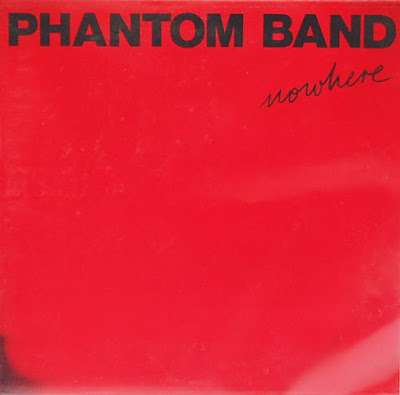 In the late 90s, this little promo compilation used to come free with some Can CDs - I'm sure I had three copies at one point.  As well as being a decent Can overview, the disc closed with one track from each of the four core members' 80s work, and one in particular really made me sit up and listen, and buy this album shortly afterwards.  That track, a stew of clicking percussion, ominous electronics and mournful spoken vocals, was Weird Love.

Jaki Liebezeit's Phantom Band released three albums between 1980 and 1984, of which Nowhere was the third, and was reissued by Can's Spoon records in 1997.  The others, which I don't have yet, are now available as Bureau B remasters - must get Freedom Of Speech soon, as apparently it's in a very similar vein to this one.

Nowhere, then, (or Now Here according to Liebezeit), is a fantastically odd glimpse into what a stripped-down, updated Can might've sounded like in '84.  Thirteen short-ish tracks of murky, echo-laden dub krautrock based around post-NDW guitars and synths, with an distinctive, off-kilter vocalist.  In this case, stepping up to the mic was Sheldon Ancel, a former US Armed Forces Network announcer.  After an intial groove into outer space, Ancel brings the album's themes sharply down to earth, with post-industrial workaday drudgery like Planned Obsolescence and Morning Alarm.  On the reggae parody Positive Day we get a pisstake of a self-help guru straight out of the 70s/80s self-realization New Age.  Highly recommended; for my money Nowhere is by far the most fascinating post-Can artifact, Holger Czukay's pioneering body of work notwithstanding.