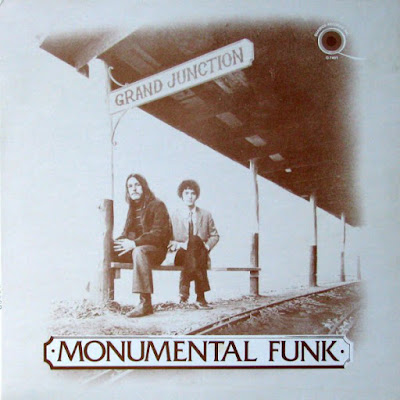 Grand Funk Railroad was one of the biggest bands of the 1970s, and the Michiganders had a past built on the regional success of a group called Terry Knight and the Pack. To make a long, convoluted story short, in the mid-'60s Knight was a DJ looking to break into singing when he discovered a group called the Jazz Masters, which he promptly appropriated, renamed The Pack, and molded into a popular regional act. Eventually, the group included future Grand Funk members Mark Farner and Don Brewer.
By 1967, the group and Knight parted ways, he for a short-lived solo career and the band becoming The Fabulous Pack. Fast forward to the early '70s and that past came back to, if not haunt, at least irritate the Railroad aggregation a few times -- perhaps not coincidentally after the firing of their manager/producer/former frontman Terry Knight.
First up in 1972 was the relatively legitimate if somewhat misleadingly titled Mark, Don & Terry, a double LP collection from the notorious Allen Klein/ABKCO Records. In classic exploito fashion, the cover art and design apes a compilation of tracks which Grand Funk's label, Capitol, had recently released. At least in the case of the ABKCO collection, the back cover clearly states where the tracks came from.
This compilation was soon reissued by ABKCO with front cover art clarifying the situation and different title that seemed to have a point to make (Funk-Off), before shortly disappearing completely. Exploitation or not, this was a well done affair, with great sound quality and printed inner sleeves reproducing old newspaper articles, a short writeup on the music and '60s style band bios.
Appearing in 1974 was a much sketchier affair: Monumental Funk was issued as both a gatefold LP and a picture disc from "Quadisco Records Inc." The album is credited to guitarist Farner and drummer Brewer, and conspicuously very careful not to actually say "Grand Funk" anywhere on it -- though the duo is pictured sitting under a sign reading "Grand Junction" inside the gatefold. Clever, folks. This album has usually been described as a bootleg over the years and often has an accompanying price tag to match that sort of designation, so I'd never picked one up until it recently appeared for a buck and curiosity took over.
So, what exactly do we have here? Immediately recognizable are the titles of the first post-Knight Fabulous Pack single, but the other titles don't match up to anything previously released by the band. Looking a bit deeper, the labels read "Licensed from Lucky Eleven Records Inc.," which in itself is somewhat interesting since the tracks from the single at least theoretically would have been owned by Allan Klein after his purchase of Lucky Eleven distributor Cameo-Parkway; that's how ABKCO ended up releasing the compilation of old Knight/Pack tracks.
Being post-Knight, those two singles tracks, "Harlem Shuffle" and "I've Got News for You," were not on the ABKCO disc. Here they are a bit slowed down from the original single and re-edited to repeat sections and make them longer. Both feature lead guitar overdubs, and "Harlem Shuffle" also features tambourine and organ additions along with a long new intro section appended. The overdubs sound pretty sonically different, so I would guess they may not involve Farner and Brewer. Undergoing a similar editing treatment is the disc's final track, "Love Lights," a medley of "Turn on Your Love Light" and "Mickey's Monkey" that essentially plays twice to extend the length!
Editing chicanery aside, the uptempo leadoff track "We Gotta Have Love" does sound like proto-GFR, as does a solid slide-guitar aided take on "Come See About Me." Whatever the provenance of these recordings (probably indeed Lucky Eleven funded, before their signing to Capitol for one final Fabulous Pack single), they're an interesting sidetrack in the Railroad's story. (Quadisco QLP-7401, 1974)
Posted by Zen Archer at 1:22:00 AM