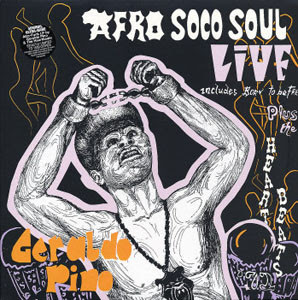 
Geraldo Pino lathers up grooves like he's holding soap under a boiling shower. Nearly all his mojo can be sourced from the same crossroads as James Brown, some light from Curtis Mayfield's conscientious soul piercing in on Pino's rooftop moonlight tomcat in his percussive and rhythm arrangements, though his midriff section sources chords from another metaphysical centre. Someone else might be able to throw some answers on how accurate that 'live' boast of the title actually is, the principles of The Beach Boys' 'Party' album possibly more in tune with reality, "Geraldo Pino is recorded in front of a live studio audience" keeps teasing me every time Pino's raps appear before his sweaty hips roll into another bar of kitsch electric organ. Whatever or wherever the truth is, Geraldo Pino is smiling somewhere in between, commanding his stage like a leather boots clad lion tamer master of ceremonies.