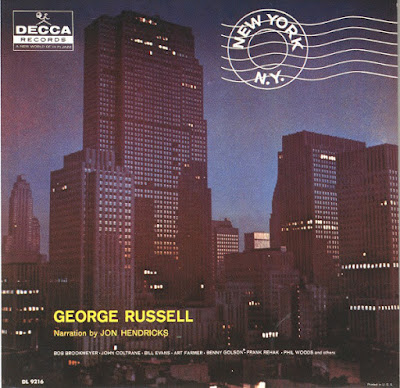 
George Russell was one of the most forward-thinking composers and arrangers on the jazz scene during the 1950s, but his work was generally more appreciated by musicians than the jazz-buying public. New York, New York represents one of many high points in his career. He assembled an all-star orchestra, including pianist Bill Evans (a frequent participant on Russell's recordings), Art Farmer, Bob Brookmeyer, John Coltrane, and Milt Hinton, among others. In Rodgers & Hart's "Manhattan," Russell has the soloists playing over the orchestra's vamp, while he also creates an imaginative "East Side Medley" combining the standards "Autumn in New York" and "How About You." His original material is just as striking as his arrangements, while vocalist Jon Hendricks serves as narrator between orchestra segments. While this release has been reissued several times, it rarely remains in print for long, so don't miss the opportunity to acquire this elusive CD.
Posted by Zen Archer at 11:47:00 PM