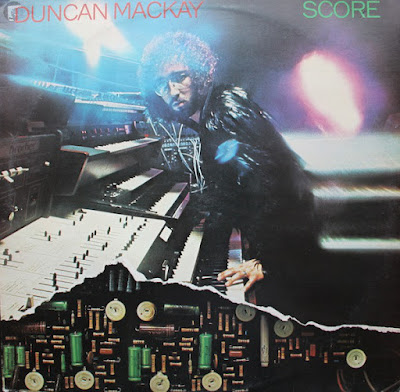 Duncan Mackay, on this, his second solo album, has moved slightly away from the Keith Emerson imitations that permeated his first album. Slightly, because the Emerson sound still appears. On the first track, Witches, a somewhat Spanish sounding symphonic proc piece, Mackay plays Emerson-like riffs on a honky-tonk tack piano, similar in sound to keith's in Benny The Bouncer. Acousic piano appears throughout the album, with Mackay providing obvious Emerson-influenced sounds.
Most obvious are Spaghetti Smooch, which sounds very much like a reworking of the main sections of Tarkus, played in 7 instead of 10, and Time Is No Healer, which owes a lot to Take A Pebble.

Despite the Emerson overtones, Mackay is developing his own style here. He does a nice job of layering piano, keyboard and synths all at the same time without making the songs too busy. One slight complaint is that his reliance on mostly Arp synthesizers makes many of the tones very similar to those used by Larry Fast at the same time.

And Mackay's inclusion of John Wetton and Mel Collins as sidemen brings him firmly into the nineteen seventies progressive rock family tree.
Posted by Zen Archer at 8:56:00 PM