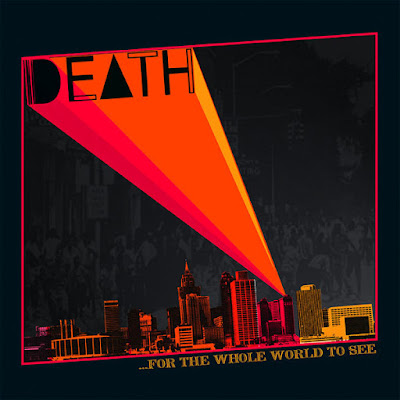 
All tracks recorded and mixed at United Sound Recording Studio in Detroit, Michigan, 1975.

No  matter how extensively technology's all-seeing eye attempts to catalog every rock recording ever made, Drag City's recent stream of reissues keeps unearthing uber-obscure excellence at a steady clip. After resurrecting 70s folk singer Gary Higgins and early 80s punk polymath JT IV (John Timmis IV), the Chicago-based label brings us Death, an all-black punk/hard-rock trio from Detroit (not to be confused with the 80s speed-metal band). Comprised of brothers David, Bobby, and Dannis Hackney, the band started out in 1971 playing R&B but switched to rock after hearing the raucous proto punk of their neighbors the MC5 and Stooges. That incarnation lasted only a few years and seven songs, and after balking at Columbia Records' demand for a name change, the band relocated to Vermont and reinvented themselves as a gospel rock group.

...For the Whole World to See, recorded in 1974, requires more ballpark adjustments than your average reissue. For one, most bands today fusing breakneck punk with arena rock bombast do so under a massive cloak of irony, and are commonly shunned (c.f. Electric Six). Making matters worse, Death espouses earnest political views while walking that tightrope. Luckily though, there's enough stylistic diversity and ahead-of-time knick-knacks on the album to prove Death more than just fanboys fawning over Kick Out the Jams and Raw Power.

Leaning heavily on pregnant pauses and choppy two-note melodies, opener "Keep on Knocking" confirms the rock+punk arithmetic of the band's mission statement. The other six tracks don't play out so predictably. "Let the World Turn" starts out in a Pink Floyd-style haze of reverberated guitars and detached vocals before igniting into a frenzied speed punk chorus. The ho-hum AOR verses of "You're a Prisoner" collide with a doomsday refrain straight out of an Ozzy Osbourne nightmare, while "Freakin Out" stands the test of time as the band's most innovative song here, anticipating the jittery pop punk that'd soon arrive from the UK.

The album falls short of a diamond-in-the-rough-caliber discovery, but considering these seven songs are the remains of an aborted 12-song full-length-from a band that reinvented itself every three or four years, For the Whole World holds up well alongside, say, concurrent Blue Oyster Cult or New York Dolls albums. This is the kind of reissue that re-instills faith in today's frustrated rockist, the listener whose fidelity gets tested by a rogues gallery of calculating rock revivalists every year. Armed with profound musicianship and the bona fide origin story so many less interesting bands' press kits grasp for, Death comes across as extremely likeable despite gleefully ripping off all the obvious influences.
Posted by Zen Archer at 12:31:00 PM