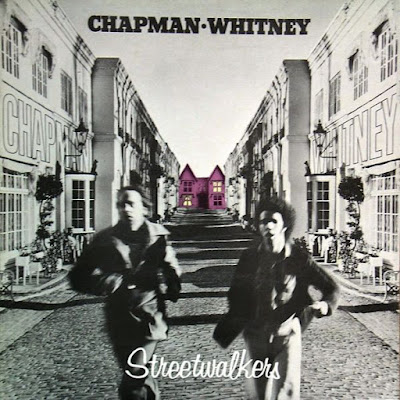 
The band, put out three consistent albums of funky booze rock in the mid to late '70s, but the origin of the band was not a mediocre affair. Roger Chapman and Charlie Whitney led their previous outfit, Family, through eight LPs of limited success, breaking up the band in late 1973. But their partnership continued and months later they set out to record a one-off album as a duo. A number colleagues contributed to the project, including alumni of Family (John Wetton, Ric Grech, Poli Palmer, Jim Cregan) and King Crimson (Wetton, Mike Giles, Boz Burrell, Ian Wallace, Mel Collins). The resulting LP, Chapman Whitney Streetwalkers, was released in May, 1974. The mixture of rockers and ballads was not Family; yet there was added depth to the music, stemming from the evolved songwriting and from the involvement of so many musicians. "Roxianna" and "Showbiz Joe" were part New Orleans jazz, continuing the Americana feel of Family's last album. "Systematic Stealth," a lovely textured ballad, and the slunky "Creature Feature" demonstrate the range of Roger Chapman's unusual voice, from gravelly crooning to just plain gravel. The album's most stunning moments, "Parisienne High Heels" and "Hangman," are brooding and hair-raising in their energy and dark themes. Chapman and Whitney kept drummer Ian Wallace and horn player Mel Collins to form a touring group, adding bassist Phil Chen and guitarist Bob Tench. Only Tench would stay for the full-fledged Streetwalkers band, which embraced funk and hard rock in a less subtle way than this first venture. Whitney's biting lap steel guitar would become a signature sound of the Streetwalkers, but the songwriting never matched what was accomplished on this album. ~ Patrick Little, All Music Guide
Posted by Zen Archer at 8:49:00 PM