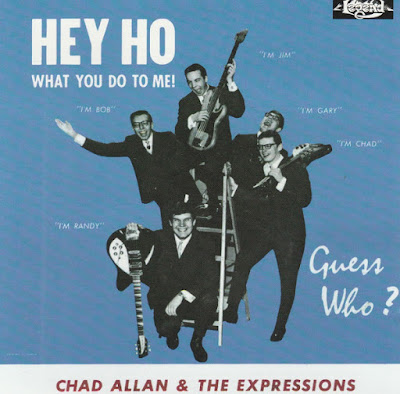 
Hey Ho (What You Do to Me!) is the second studio album by the Canadian rock band The Guess Who. This album is also the last to feature Bob Ashley on keyboards. This album was originally released on Quality Records in 1965. The cover gave credit to "Chad Allan & the Expressions (Guess Who?)

Before the next 1966 album "It's Time". The Guess Who were called before as Chad Allan & The Expressions without second lead vocals Burton Cummings is another chronicling detail story of their background music in history. Compared to as the fab four from britain called "The Beatles". And a lookalike reputation right here of this old album CD disc title and the song included called "Hey Ho (What You Do To Me)".I would'nt say this is the best music ever but when Burton Cummings voice is connected to my feelings of opinions then I'll know it's good for myself!
Posted by Zen Archer at 5:03:00 PM

Email ThisBlogThis!Share to TwitterShare to FacebookShare to Pinterest
Labels: Canada, Chad Allan & The Expressions, The Guess Who