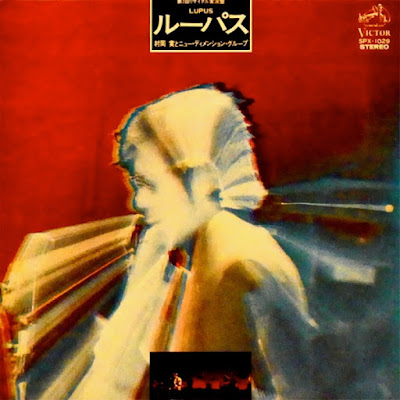 Shakuhachi master and band leader Muraoka recorded scores of records over the years, covering all kinds of ground, with a focus on integrating the traditional Japanese shakuchachi flute into modern western-style music. His most interesting period (from a rock/jazz listener's perspective) unsurprisingly coincided with the experimental New Rock boom in Japan circa the early/mid 70s. His most well-known works are from earlier on in this timeframe, when he released albums like "Osorezan" and "Bamboo", which have long been popular with the rare groove/DJ crowd. But after this he developed a darker, more experimental streak, releasing a string of albums with his New Dimension Group where he started to twist and mutate traditional Japanese music to his own ends, leading to fascinating efforts such as "Jigen" (1972) and "So" (1973). However, these were still probably too traditional to catch the ear of many prog/psych listeners. This all changed in 1974, when he unleashed "Lupus", a live concert hall recording (as many of his works were) that takes his earlier concepts and finally goes off the deep end with them. The eponymous side-long first track is an immense piece of hybrid far eastern psych/prog/jazz-rock which, aside from the hypnotically pulsing electric bass, amazingly consists of nothing but traditional Japanese instruments and drums, although you'd scarcely know it. Everything is put through the fuzz/wah blender, creating sounds and textures more reminiscent of electric organ and fuzzed out guitars. It starts out tranquilly, but then builds and builds in intensity, climaxing in a totally frenzied freakout conclusion that will leave your brain in a puddle-like state. Awe inspiring. The second side is unfortunately much more traditional, consisting of three shorter pieces, although the quality is still high. But that first side... Wow. Deserves to be much more well known.