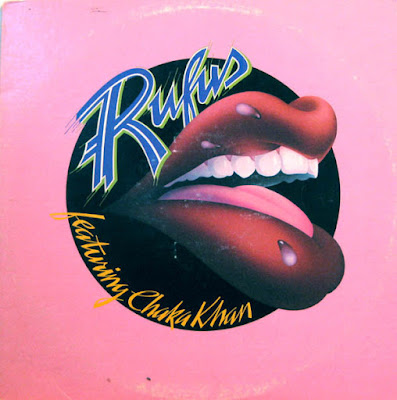 
One of the most talented bands of the '70s, Rufus Featuring Chaka Khan is the groups' fourth release in close to three years. Although this effort doesn't have the epiphanies of 1974's Rufusized, Rufus Featuring Chaka Khan has them becoming more established as one of the best bands in R&B and pop. The first track, Gavin Christopher's "Fool's Paradise" displays Khan's skill at screaming notes and making complex ideas sound simple, and vice versa. That art is put to work throughout Rufus Featuring Chaka Khan. "Everybody's Got an Aura" surely could be dismissed as babble but Khan gives the sentiments a ring of truth even as she shouts, "Everybody's got karma!" The lilting yet propulsive "Circle" has great bass work from Bobby Watson as Khan sings likeable and spacy lines, the best being, "My love is like a zero/It is nothing and everything." The albums biggest track, the smoldering "Sweet Thing," has Tony Maiden's gentle guitar and Kevin Murphy's economical electric piano chords. The song is arguably the group's best as Khan's bittersweet vocal provided a standard many singers have attempted to approximate to no avail. The party starters "Have a Good Time" and "Dance Wit Me" both tread familiar ground and pale in comparison to the classic "Once You Get Started." The last track, a cover of "Jive Talking," is inexplicably slowed to a crawl, therefore, diminishing its appeal. Rufus Featuring Chaka Khan perfectly captures their unconventional sound and features Tower of Power on horns and Clare Fischer's string arrangements. This album is one of their best and is recommended.
Posted by Zen Archer at 11:51:00 PM 1 comment: Links to this post 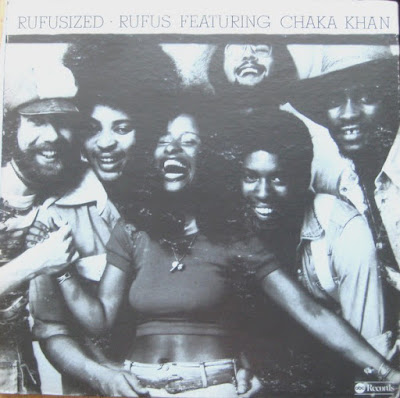 In the early '70s, Rufus was one of the most popular and interesting bands in R&B and rock. Of course, the reason was Chaka Khan, who possessed an amazing voice that was well versed in rock and jazz every bit as much as R&B. Their debut went nowhere, Rags to Rufus offered two instant classics, and Rufusized displayed their skill as album artists. Truth be told, this version of Rufus was nearly a brand-new band, as three members exited and guitarist Tony Maiden and bassist Bobby Watson joined up. The result was a funkier and more talented band who would give Khan the needed earthy and ethereal mix that would make her soar. The sexy and danceable "Once You Started" proves that this version of the band gave off immediate sparks and results. The sneaky and funky "Somebody's Watching You" has Khan displaying even more confidence. After great album cuts like the soothing "Your Smile" and "Pack'd My Bags," Rufusized ends on a strong note. The poignant and sophisticated "Please Pardon Me (You Remind Me)" leads into the Maiden and Khan duet cover of Bobby Womack's "Stop on By," which nearly matches the steaminess and wry nature of the original. Often forgotten due to the bigger hits on Rags to Rufus, this easily outstrips that album and became of one the band's most-loved efforts.
Posted by Zen Archer at 11:11:00 PM 1 comment: Links to this post 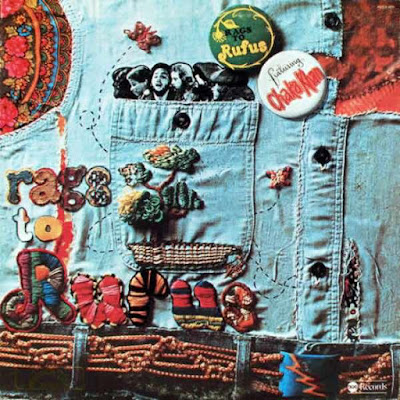 
In many respects the group seems to be feeling their way through this. Luckily, Rags to Rufus does feature some can't-miss propositions. The great rock and funk mix of "You've Got the Love" all but sums up what Chaka Khan was going to be doing for the long haul. The biggest hit here, "Tell Me Something Good," is a rare instance of an artist like Stevie Wonder giving away a tune that he could have had a big hit with himself. That being said, it was Khan's playful and sensual vocal that put it over the top. The songs that veer from the formula suffer the most on Rags to Rufus. The cutesy "I Got the Wrong Street" and the saccharine "Walkin' the Sun" are duds. Even early on, Khan needed songs that were complicated either lyrically or musically. On Ashford & Simpson's "Ain't Nothin' but a Maybe," Khan displays the maturity and knowing that it took to make the song have that much more emotional weight. Rags to Rufus ends on a relaxing note with the tracks, "Look Through My Eyes," "In Love We Grow," and the sultry "Smoking Room." This album is far from perfect, but it's certainly representative of the band's gifts and Khan's vocal power.
Posted by Zen Archer at 11:05:00 PM 1 comment: Links to this post 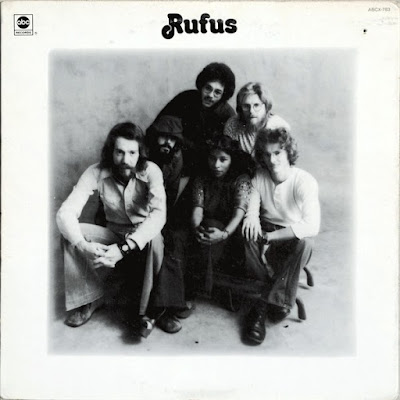 
One of the most commercially successful funk groups of the '70s, the multi-racial Rufus are today best remembered for launching the career of soul diva Chaka Khan, whose fiery lead vocals were easily the band's focal point. Powered by Khan -- who was eventually billed in addition to the group -- and an unerring sense of groove, Rufus scored an impressive string of hit singles on both the pop and R&B charts, which lasted through the '70s and up to Khan's official departure in 1983.

Rufus grew out of the Chicago band the American Breed, which had a hit in 1968 with the oldies-radio staple "Bend Me, Shape Me." Guitarist Al Ciner, bassist Chuck Colbert, drummer Lee Graziano, and keyboardist Kevin Murphy had all played in the band at one time or another before forming a new group, originally called Smoke, with vocalists Paulette McWilliams and James Stella. Stella was quickly replaced by lead vocalist/songwriter/keyboardist Ron Stockert, and Colbert by bassist Dennis Belfield; the group changed its name to Ask Rufus, which was later shortened to Rufus. In 1972, drummer Andre Fischer -- another former American Breed member -- replaced Graziano, and a young female vocalist named Chaka Khan (born Yvette Marie Stevens) replaced McWilliams. Although Khan's dynamic stage presence helped this version of the band take off, Stockert was still the guiding force when they signed with ABC in 1973, and he lent a more pop/rock flavor to the group's self-titled debut, released later that year.

Although the album sold poorly, Rufus gained a fan in Stevie Wonder thanks to their cover of his "Maybe Your Baby." Wonder gave them a new composition, the slowly grinding "Tell Me Something Good," that he'd written specifically with Khan's vocal style in mind. Pulled as a single from their second album, 1974's Rags to Rufus, "Tell Me Something Good" was a Top Five smash that turned Khan into a star; she also co-wrote the R&B chart-topping follow-up, "You Got the Love." Clearly, the band had found its niche, and a number of personnel shifts ensued: Stockert left, Belfield was replaced by Bobby Watson, and Ciner was replaced by Tony Maiden. Their funk sensibility thus bolstered, Rufus returned with a strong new album before year's end, Rufusized, which spawned two more hits in "Once You Get Started" and "Please Pardon Me (You Remind Me of a Friend)." The billing on 1975's Rufus Featuring Chaka Khan made the singer's star power official, and produced one of the group's biggest hits in the R&B number one "Sweet Thing." Dave "Hawk" Wolinski joined as a second keyboardist for 1977's mellower Ask Rufus (the hit was "At Midnight (My Love Will Lift You Up)"), and William "Moon" Calhoun replaced drummer Fischer on 1978's Street Player.


In 1973, Rufus had yet to start going by the name Rufus & Chaka Khan. The band was still obscure, and the single that made Khan a superstar (1974's "Tell Me Something Good") was still a year away. Khan was handling most of the lead vocals, although keyboardist Ron Stockert was still doing a fair amount of lead singing. It was in 1973 that ABC released Rufus' self-titled debut album, which wasn't the big seller that 1974's Rags to Rufus, 1975's Rufus Featuring Chaka Khan, and 1977's Ask Rufus would be. From a commercial standpoint, the problem with this LP was its lack of a really strong single -- there wasn't a "Once You Get Started," a "Sweet Thing," or a "Tell Me Something Good" to drive radio programmers wild. But from a creative standpoint, this is a decent and promising, if imperfect, debut. In 1973, Rufus' original pre-Tony Maiden, pre-Bobby Watson lineup favored an earthy soul/rock blend along the lines of Ike & Tina Turner; in fact, Khan's passionate vocals on "Feel Good," Stevie Wonder's "Maybe Your Baby," and Stephen Stills' "Love the One You're With" point to the fact that Tina Turner was among her early influences. Not that Khan is actually emulating Turner, Aretha Franklin, or anyone else; in 1973, Khan was quite distinctive herself. As time passed, Rufus & Chaka Khan became sleeker and less rock-minded -- if your introduction to them was "Once You Get Started" or "Sweet Thing," you might be surprised to hear how rock-minded this LP is. Rufus falls short of essential and isn't recommended to those with only a casual interest in Khan's years with the band, but it's an enjoyable debut that certainly isn't without historic value.

Following the release of Street Player, Khan made what was perhaps an inevitable move into solo recording with the release of her debut, Chaka; despite scoring a significant hit with "I'm Every Woman," she remained an official member of Rufus. Still, the band's next album, Numbers, was recorded without her, and upon its release in 1979, it stiffed. Khan was back on board later that year for Masterjam, produced by Quincy Jones, and the band (featuring new drummer John "J.R." Robinson) was back on top of the R&B charts with "Do You Love What You Feel." However, Khan split again for 1980's Party 'Til You're Broke, and although she returned for 1981's Camouflage, Rufus' chart fortunes were slipping away. The George Duke-produced, Khan-less Seal in Red bombed, but Khan returned for one last go-round on 1983's Stompin' at the Savoy, a double-record set featuring three sides of live material and one side of new studio recordings. One of those new songs, "Ain't Nobody," became Rufus' final number one R&B hit, and also won a Grammy, allowing the group to end its career on a high note. Her contract up, Khan finally left for good afterwards and became a superstar thanks to a cover of Prince's "I Feel for You."