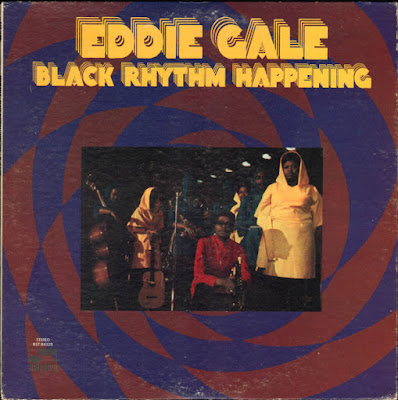 
Love it or hate it, trumpeter Eddie Gale's second Blue Note outing as a leader is one of the most adventurous recordings to come out of the 1960s. Black Rhythm Happening picks up where Ghetto Music left off, in that it takes the soul and free jazz elements of his debut and adds to them the sound of the church in all its guises -- from joyous call and response celebration on the title track (and album opener), to the mournful funeral sounds of "Song of Will," to the determined Afro-Latin-style chanting on "Mexico Thing" that brings the pre-Thomas Dorsey gospel to the revolutionary song style prevalent in Zapata's Mexico -- all thanks to the Eddie Gale Singers. Elsewhere, wild smatterings of hard and post-bop ("Ghetto Love Night") and angular modal music ("Ghetto Summertime," featuring Elvin Jones on drums and Joann Stevens-Gale on guitar), turn the jazz paradigm of the era inside out, simultaneously admitting everything in a coherent, wonderfully ambitious whole. There is no doubt that Archie Shepp listened to both Ghetto Music and Black Rhythm Happening before setting out to assemble his Attica Blues project. The album closes with "Look at Teyonda," a sprawling exercise in the deep melding of African and Latin folk musics with the folk-blues, flamenco, and jazz rhythms. Funky horns (courtesy of Gale, Russell Lyle, and Roland Alexander) moan toward Fulumi Prince's startlingly beautiful vocal. Stevens-Gale's guitar whispers the tune into the field before the saxophones and brass come to get it, and when they do, long open lines are offered slowly and deliberately, as Jones' shimmering ride cymbals triple-time the beat into something wholly Other. Black Rhythm Happening is a timeless, breathtaking recording, one that sounds as forward-thinking and militant in the 21st century as it did in 1969.
Posted by Zen Archer at 11:54:00 PM 1 comment: Links to this post 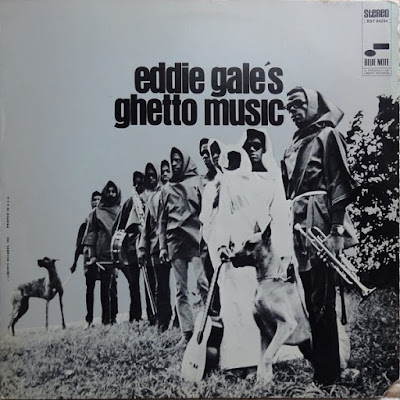 
The aesthetic and cultural merits of Eddie Gale's Ghetto Music cannot be overstated. That it is one of the most obscure recordings in Blue Note's catalog -- paid for out of label co-founder Francis Wolff's own pocket -- should tell us something. This is an apocryphal album, one that seamlessly blends the new jazz of the '60s -- Gale was a member of the Sun Ra Arkestra before and after these sides, and played on Cecil Taylor's Blue Note debut, Unit Structures -- with gospel, soul, and the blues. Gale's sextet included two bass players and two drummers -- in 1968 -- as well as a chorus of 11 voices, male and female. Sound like a mess? Far from it. This is some of the most spiritually engaged, forward-thinking, and finely wrought music of 1968. What's more is that, unlike lots of post-Coltrane free jazz, it's ultimately very listenable. Soloists come and go, but modes, melodies, and harmonies remain firmly intact. The beautiful strains of African folk music and Latin jazz sounds in "Fulton Street," for example, create a veritable chromatic rainbow. "A Walk with Thee" is a spiritual written to a march tempo with drummers playing counterpoint to one another and the front line creating elongated melodic lines via an Eastern harmonic sensibility. The final cut, "The Coming of Gwilu," moves from the tribal to the urban and everywhere in between using Jamaican thumb piano's, soaring vocals à la the Arkestra, polyrhythmic invention, and good, old-fashioned groove jazz, making something entirely new in the process. While Albert Ayler's New Grass was a failure for all its adventurousness, Eddie Gale's Ghetto Music, while a bit narrower in scope, succeeds because it concentrates on creating a space for the myriad voices of an emerging African-American cultural force to be heard in a single architecture. This is militant music posessed by soul and spirit.


It is often difficult to gauge the relative importance or message of an artwork, years or decades after its initial release. Truly impressive are those works that not only retain their Zeitgeist, the spirit of the times, but also find relevance and significance with the present. Listening to the re-release of 1968's Eddie Gale's Ghetto Music, one not only senses the social awakening of the late 1960s, there is an equal and unfortunate awareness of our current cultural waste. Francis Wolff, co-founder of Blue Note, felt so strongly about this album that he personally financed the production and release of this music in 1968, after recording Gale on Cecil Taylor's Unit Structures and Larry Young's Of Love and Peace.


The good people at San Francisco-based Water Music have taken the initiative and re-released Eddie Gale's Ghetto Music on CD. The success of the album stems from its unique use of folk, blues, gospel, soul and jazz to create a wildly vibrant, urban force. "The Rain," with Joan Gale's soft, assured delivery, sets the pace for the entire album, as it morphs from a single guitar strum into a massive entity of sound, rhythm, and swing. Surprising, since 17 musicians appear on the album, is the precision and efficiency of the music.


On "Fulton Street," for example, the feel of the famous Brooklyn street is captured immediately by the child-like voices pronouncing its name proudly: "Fulton Street, baby!" Then, the low down riff comes in, the singers mimic the sound of the horns, they interchange riffs, and someone runs here, somebody else goes there, and you feel it, you're on Fulton Street, baby. It welcomes you.


Once in, it may well be difficult to relinquish the sensation of songs like "A Walk With Thee" or "The Coming of Gwilu." Both burn as deep, groove as hard, as anything else on the vaunted Blue Note catalog. For that reason, those that rarely venture outside the hard bop fringes of Blue Note will be most rewarded by the music here, as it presents new possibilities without abandoning the "Blue Note sound."