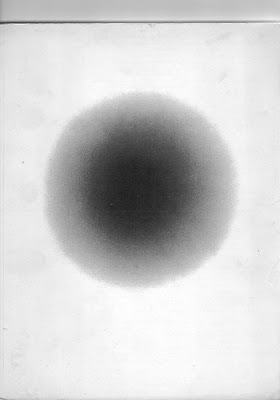 This book was published in 1971 by the Stedelijk Museum (Museum of Modern Art) in Amsterdam for the exhibition Geluid < = > Kijken, or Sound < = > Sight. It contained three flexi-discs of artists that were involved. Ton Bruynèl, Dick Raaijmakers and Peter Struycken were notable Dutch artists experimenting with electronic sounds balancing on the fringes of science, art and music.
For this exhibition they created installations trying to transcend the auditory realm into the visual. The music is for example derived from speakers used as an instrument generating sounds through their scientific components and abilities. The loudspeaker as an instrument has also been used by John Cage in certain compositions. Here is a short overview of the works of the three artists.

Ton Bruynel’s subject is an object: visually it is a square in which the visitor finds himself among objects which are, in a sense, scale models of the room itself. The sound is derived from the size, the shape (cubic) and the material (steel) of the objects; it is subsequently stored on tapes which return it to the cubes. The succession of sound structures knows neither beginning nor end. Due to its reverberation against the hard (steel) walls, the sound identifies with the surrounding space to a high degree, just as it identifies with the material.

Dick Raaijmakers elecits a dialogue between sound and visual motion in a series of loudspeakers combined with steel balls, spheres or small metal rectangles. The subject of the dialogue is the unmasking of the loudspeaker. ‘The loudspeaker communicates in a very elementary fashion – it speaks and it listens.’ writes Dick Raaijmakers elsewhere in this catalogue.

Peter Struycken is concerned with the problem of how to obtain variations in large numbers of structures built up of similar component parts. Under certain conditions a relatively slight variation in a structural rule can bring about a high degree of variation in the visual and auditory effect. Hi Image and Sound programm I, is a model in which he investigates those conditions. The methods are similarly applied to image – changing in time – and sound.

Geluid  <=> Kijken is a great Dutch avant-garde document containing some harsh noise, electronic and weirdly generated sounds and it must have been one of the more interesting multidisciplinary exhibitions at the Stedelijk Museum in the early seventies. The book came with a fold out panel of all of Peter Struycken’s generated patterns. Scans of the whole book with information in Dutch and English are included in the file.
Posted by Zen Archer at 4:47:00 PM 2 comments: Links to this post