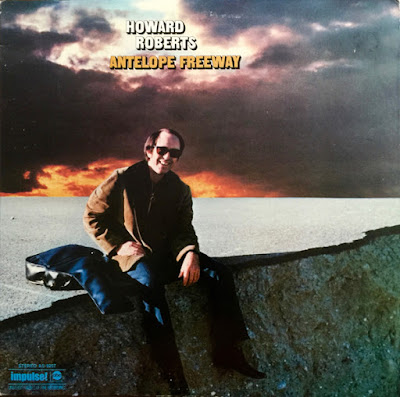 
"Not necessarily beautiful, but definitely stoned. You might not believe it unless you hear it." JSngry, Texas [Blogger]

ANTELOPE FREEWAY is a state of the art recording which combines music and stunning stereo sound effects: utilized at points as Harry Partch-like tuned percussion samples, and at other points like Firesign Theater radio cross-fades and comic interludes.

A real dog yummy for your stereo, this ultra-dynamic recording is intended to be played LOUD, and to fill the stereo soundstage with dimensional ambiance and sonic paintings, alternating between a heavy jazz-blues feel and echoplexed ballads.

Critics didn't know what to make of ANTELOPE FREEWAY when it was first released, and the DOWNBEAT critic launched a preemptive strike and nuked it with a rating of 1/2 stars out of a possible five. Me, I have always found this tongue-in-cheek recording to be funky and soulful, witty and earnestly engaging...and yes, SWINGING. Howard Roberts couldn't NOT Swing if you held a gun to his head.

Roberts' playing and conceptual outreach is seriously underrated on both of these recordings (ANTELOPE FREEWAY and the follow-up EQUINOX EXPRESS ELEVATOR), even by some of his most fervent fans--finally released on CD for the very first time as a single entity in a 2-for-1 format, which allows listeners to follow the progress of stylistic evolution of Howard Roberts emerging concept, circa 1970-1972, and to enjoy the muisic both in an uninterrupted suite format as it was originally intended, as well as to pull out individual tracks.

Roberts' playing always had a very strong blues component, and if you look through his recorded output, he also had a very mischievous sense of humor. ANTELOPE FREEWAY and EQUINOX were experimental recordings, made at the hippest LA studios with the most able and adventurous musicians, who, accustomed as they were to working on the L.A. studio scene, were certainly liberated by these formats; these recordings are also among the earliest to deploy the then emerging 16-track/2-inch recording technology, so the ability to create a multi-track collage of sound effects and music, in the manner of a free form radio shows of that era (a la Firesign Theater), let alone the Beatles and Jimi Hendrix, is part of the motivation and the charm of ANTELOPE FREEWAY. Roberts and collaborators Ed Michel and Bill Szymczyk's portrayal of two truckers making their way through the late night radio dial on "Five Gallons Of Astral Flash Could Keep You Up For Thirteen Weeks" is brilliant satire of trends and tastes, particularly when the truckers unexpectedly stumble over some freak-out avant garde jazz. "What the hell?"

Additionally, not only is the playing visceral in an edgy jazz-fusion manner, but as we have pointed out, it is a most compelling aural document--a very progressive recording and mix. And for such a blues-drenched be-bopper as Howard Roberts, the use of guitar effects, such as a stereo-panned Echoplex on the ballad "Dark Ominous Clouds", and an Energy Bow (for its limitless sustain) on "Sixteen Track Fireman" (let alone the bloom and bite of over-driven amplifiers) are not mere gimmicks but natural extensions of Roberts' own style and knowing nods to the younger generation of emerging LA guitarists, influenced as they then were by Clapton, Hendrix, Beck and Townsend.
Posted by Zen Archer at 12:33:00 AM 2 comments: Links to this post 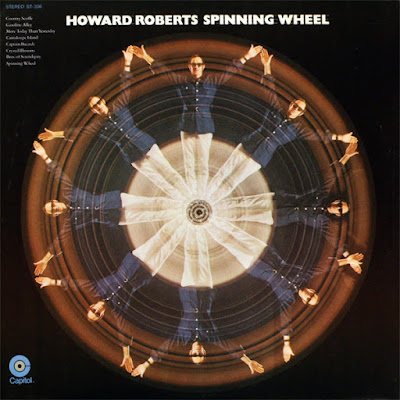 
For those who are not familiar with Howard Roberts, he was a highly respected and talented jazz guitarist who also recorded on a fair number of sound tracks for TV shows and movies, such as Bullitt. He played very tastefully and with a very nice tone. His guitar sound was usually quite pleasant and at the same time, complex. Most of the material that he released as a solo artist consisted of songs that rarely exceeded three to four minutes in length. So, there were rarely extended solos and improvisations, although what he did play was never boring. Most of his Capitol releases seemed to be directed at both jazz listeners as well as adults who enjoyed pop. I guess that the idea was to be successful commercially. Some, certainly not all, of the tunes could have been acceptable on easy listening radio stations.

On this LP, he was accompanied by Dave Grusin on keyboards and a young Tom Scott on tenor sax. Of course, there was also a bass and drummer. The title track, "Spinning Wheel," was a hit for Blood Sweat and Tears. Some of the other notable songs on this release are Crystal Illusions, which was a hit for Sergio Mendes and Brasil 66, and Herbie Hancock's composition, "Cantaloupe Island." Kai Winding does a better version (my opinion only) of this song on his LP, Dirty Dog, which unfortunately, never made it to CD. Finally, in my view, the highlight of this CD is the version of "More Today Than Yesterday," which was a big success for the Spiral Starecase. Mr. Roberts' guitar really impresses on this one. It's a nice tune; I never met anyone who disliked the song.

If you are studying the guitar or just enjoy listening to it, I recommend this CD. The running time is fairly short and it's pricey because it's a Japanese import that might be difficult to find in time. No Howard Roberts collection would be complete without it! 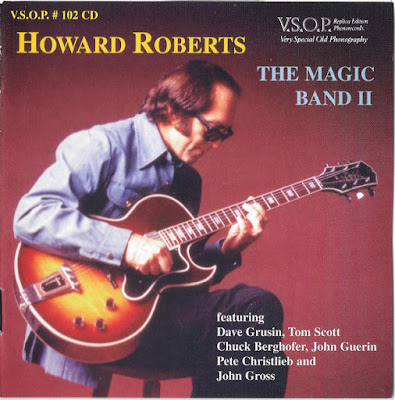 
Because he chose to spend nearly his entire career as a studio guitarist, there are relatively few recorded examples of Howard Roberts as a bop-oriented jazz player. This 1998 CD has seven privately recorded performances of Roberts at the legendary Donte's club in Los Angeles during May 1968. He stretches out on seven jazz standards with the assistance of pianist Dave Grusin (a few years before he started becoming well-known), bassist Chuck Berghofer, and drummer John Guerin. In addition to four quartet numbers (including "On a Clear Day" and "Alone Together"), Roberts is joined on "Milestones" by tenor saxophonist John Gross, on a burning "Giant Steps" by the young Tom Scott on tenor, and on "Dolphin Dance" by both Scott and fellow tenor Pete Christlieb, who at one point get involved in a saxophone battle. The recording quality is listenable, if not flawless, but the music (which shows that Roberts could jam with the best of them) is somewhat valuable.
Posted by Zen Archer at 12:20:00 AM 1 comment: Links to this post 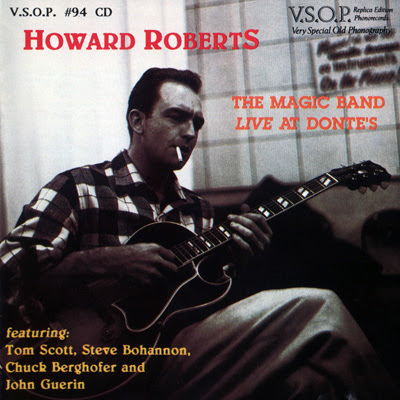 
I am not sure this is ready for an audience beyond musicians or patrons who were present when the tracks were preformed live at Donte's in North Hollywood. As a musician I certainly got a lot out of repeated listens because there are parts where the ensemble (or individual musicians) were flat out cooking. There were other parts on most of the tracks where things seemed to get a bit jumbled. This is more a blowing session than pre-agreed upon arrangements.

Run through the sound samples to get a gist of the music. Granted, the way each track twists and winds musically, you are not going to get a true representation, but at least you will get a general feel. Also, nailing the music is a bit difficult. It's sort of like funk, mixed into 'free jazz' and tossed into where the West Coast style had evolved by mid-1968. Still, some of the improvising is amazing, and I definitely found riffs and fills that drummer John Guerin was using that are interesting. I also liked the way Guerin and bassist Chuck Berghofer held down the rhythm and pulse in a fluid (but still solid) manner.

Of course, if you are a guitarist your attention is going to be drawn to Roberts, who is the real center of the band, and the tracks on this album. The real variables are Steve Bohannon on organ and Tom Scott on soprano, alto and tenor saxophones. Bohannon adds an element of funk (and he can definitely swing), whereas Scott managed to play some phrases and passages that displayed genius, while going off the rails on others (to my ears, anyway.)

This was recorded for the V.S.O.P. label during July 1968. The sound quality is surprisingly good, and the audience noise, while in the mix, adds to the ambience more than it interferes with the music. This is not what I would call an essential album, but for the niche I mentioned above it is worth checking out.
Posted by Zen Archer at 12:16:00 AM 1 comment: Links to this post