Mother Mallard's Portable Masterpiece Co. - 1976 - Like A Duck To Water

Mother Mallard's Portable Masterpiece Co.
1976
Like A Duck To Water 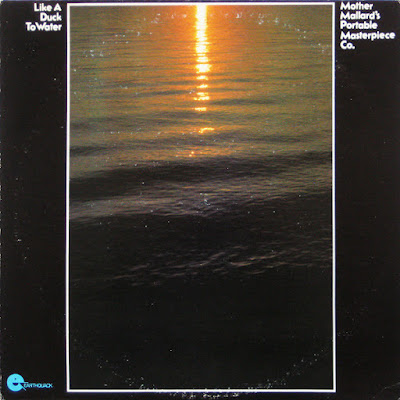 Based in Ithaca, NY, Mother Mallard's Portable Masterpiece Co. began doing live performances of music composed for synthesizers in 1969. Formed by composer and keyboardist David Borden "to present very new and startling work", it initially presented pieces by Robert Ashley and others but soon focused on original works. Working closely with Robert Moog, MMPMC became an all-synthesizer ensemble devoted to new music, most likely the worldÕs first, and one of the very first performing synthesizer ensembles. Said Borden: "it seemed to me that the synthesizer could fit in with Bucky Fuller's idea of 'doing more with less': that three people with Moogs could make a lot more noise than three string players!"

Borden, a native of Brookline, MA, began working with Moog in 1967. A Fulbright scholar with degrees from Eastman School of Music and Harvard, Borden moved to Ithaca on a Ford Foundation Composer-in-Residence grant; Moog's company was in nearby Trumansburg. Moog taught Borden how to use his new invention, the voltage controlled electronic synthesizer, gave Borden round-the-clock access to his shop, and was supportive of MMPMC, lending it equipment and recommending it for concerts. Until late 1971, when Moog sold his company and moved to Buffalo, MMPMC used Moog's factory for rehearsals, premiering early pieces down the street at the Kosmos Restaurant.

MMPMC's performance of "Easter," at Cornell's Sage Chapel on Easter Sunday, 1970, marked the world premiere of this piece as well as the first-ever live performance using a MiniMoog Ð the band had Moog's prototype. At a subsequent concert at NYC's Trinity Church Ð the MiniMoog's NY premiere, months before its "official" debut by Dick Hyman Ð the band found it "hadn't been billed as Mother Mallard or David Borden but as THE MOOG SYNTHESIZER. This kind of billing would dominate our performances for the first few years, because no one else was performing with Moog Synthesizers except for Walter Carlos and Richard Teitelbaum." MMPMC's numerous live performances throughout the 1970s included concerts at Cornell University (Barnes Hall and the Johnson Museum of Art); various New York City venues (The Kitchen, Paula Cooper Gallery, Public Access Synthesizer Studio/PASS, the Dance Theater Workshop, etc), and colleges and universities in the northeast.

Mother Mallard's first Moog-based lineup, consisting of Borden, Steve Drews and Linda Fisher was featured on the band's LP, MMPMC, self-released on the Earthquack label in 1974. It featured compositions by both Borden and Drews, equally responsible for the bandÕs early sound. As Borden recalls: "Steve found very exotic and beautiful sounds on the Moogs, and was a master performer on the ribbon controller. My stuff kept to more simple sounds with the emphasis on multi-metered contrapuntal figures that repeated at different lengths." When Cuneiform reissued this LP on CD, MMPMC 1970-73 [Rune 109] in 1999, critics world-wide claimed it was an essential work, praising both its technological and stylistic innovations. The New York Press described it as "eye-opening in terms of innovation, providing the missing links between several disjunctive musical styles." And Magnet remarked: "Most of the early attempts to make serious music with synthesizers came off like a child learning how to ride a bike; awkward and uncoordinated, generally resulting in a painful experience for all involved. In contrast, the pioneering efforts of MMPMC stand as a monument to the gimmick-less magnificence that can be achieved with a pure application of this technology".

Some key figures of the 70's recognized MMPMC's skill at the time. Borden recalls that: "director Billy Friedkin had heard some re-broadcasts of our WBAI Free Music Store concerts and was interested in having me compose music for his new horror film. We were all invited to the cast party of the EXORCIST at the end of the shooting, and Billy introduced us around to everyone as the people who were doing the soundtrack." Ultimately, Friedkin used BordenÕs music in only two scenes of The Exorcist (which was recently reissued),: when Father Merrin is looking up at the house, about to enter; and when Father Karras scurries down the stone stairs, followed by a montage leading to Regen's bedroom door"

Late in 1974, Linda Fisher left the band. Judy Borsher, a long-time associate of MMPMC who had helped start Earthquack, joined the band in 1975. In 1976, the line-up of Borsher, Borden and Drews recorded Like A Duck to Water. MMPMC's second studio recording released on Earthquack. The LP featured two pieces by Drews, "Oleo Strut" and "Waterwheel", and Borden's "C-A-G-E Part II", part of a series based on the chords C, A, G and E, composed for John Cage.

This CD reissue of Like A Duck To Water contains the entirety of MMPMC's second album as well as an additional 20' of previously unreleased contemporary material. It also contains a short Quicktime movie of the band performing live in 1976, an excerpt from Edin Velez's video "Mother Mallard's Portable Masterpiece Company", shot by Vito Brunetti and featuring Drews' "Waterwheel" as a soundtrack. This CD is an essential acquisition for those interested in MMPMC , David Borden's later works (especially the Continuing Story of Counterpoint series), minimalism, and early synthesizer music. This album provides a uniquely American slant on synthesizer music by a band whose pioneering contributions to the genre had been forgotten until now. 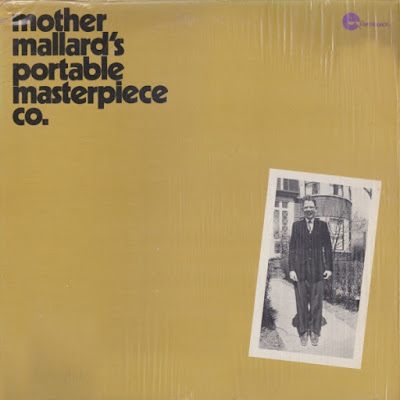 Mother Mallard's Portable Masterpiece Company makes "music of machined intricacy, like a metal-plated Bach fugue". Described as, "spiraling patterns of interlocking melodies that draw you into a kaleidoscopic maze", the group mines an intricate brand of contrapuntal minimalism that easily sits next to Steve Reich, Philip Glass and Terry Riley. MMPMC's music is a unique and extremely enjoyable blend of space electronics, minimalism, and contemporary classical and exhibits a uniquely American slant on synthesizer music by a band whose pioneering contributions to the genre have been largely overlooked by the mainstream.

Mother Mallard's Portable Masterpiece Co Before German bands like Kraftwerk and Tangerine Dream brought electronics to the attention of the mainstream, their musical path had already been tread here in the United States by Mother Mallard's Portable Masterpiece Company.
MMPMC got its start in 1968 when composer David Borden decided to put together the world's first all-synthesizer ensemble after meeting and working with the now legendary Robert Moog; widely credited as the inventor of the synthesizer. Moog literally gave Borden and his comrades the keys to his development shop in upstate New York where they experimented with the pioneering equipment.

Based in Ithaca, NY, Mother Mallard's Portable Masterpiece Co. began doing live performances of music composed for synthesizers in 1969. Formed with intentions to, "present very new and startling work", MMPMC initially presented pieces by, then obscure, Robert Ashley, John Cage, Terry Riley, Steve Reich and Philip Glass; being the first group to play Glass' music outside of his own troupe. Working closely with Robert Moog, MMPMC soon began focusing on original works and became an all-synthesizer ensemble devoted to new music (most likely the world's first) and one of the very first performing synthesizer ensembles. This material pre-dates or is contemporary with the first contributions to the genre and carried on fully the concept of experiencing experimental electronic music before a live audience. Said Borden: "it seemed to me that the synthesizer could fit in with Bucky Fuller's idea of 'doing more with less': that three people with Moogs could make a lot more noise than three string players!"
As Mother Mallard's Portable Masterpiece Comapny, David Borden, Steve Drews and Linda Fisher composed and performed their own pieces for RMI Electric Piano (their only polyphonic instrument), three modular Moogs and two MiniMoogs (including the prototype which is now on display at the Audities Foundation at the Chinook Keyboard Centre in Calgary). The Moogs were gradually replaced by digital instruments, and the group underwent personnel changes. Now, after over 30 years have passed, things have come full circle, with analog sounds and modular synthesizers being in vogue once again.
Listening to Mother Mallard's music now, we find that it references many electronic music movements that developed later: minimalism, art rock, ambient, techno and even "Krautrock". For history's sake, the re-issue of MPMC's two albums may help David Borden take his rightful place alongside Reich, Riley, and Glass (see reviews below).

Mother Mallard's Portable Masterpiece Co
MMPMc The group has continued on, in various incarnations, to this day. On 3 October 1999, MMPMC marked the 30th anniversary of its formation with a special concert at Cornell's Proscenium Theater. Assembling new and old members of Mother Mallard, they performed early and late selections from the group's repertory. This event was followed up by a concert appearance at The Smithsonian Institute on 15 April 2000.
MMPMC 2003In the late 1970's, David Borden and Mother Mallard's Portable Masterpiece Co. travelled to Philadelphia to perform a concert of electronic music in the church santuary of St. Mary's Hamilton Village, setting into motion the now 25+ year legacy of Philadelphia's innovative music scene. On 10 May 2003, MMPMC returned to this venerable venue to once again perform new music for yet another generation of adventureous listeners.

This timely release charts the original works of Mother Mallard's Portable Masterpiece Company, who have a pretty fair claim to be the world's first all-synthesizer group. The initial lineup of David Borden, Linda Fisher and Steve Drews came together in late-60s rural New York state, to work through the possibilities offered by Robert Moog's first commercially available synthesizers (for completists: 2 MiniMoogs, 3 Custom Moog Modular Systems and an RMI Electric Piano). In doing so, their investigations formed an important stage of development in electronic music. And, unlike other early electronic contemporaries, very little here sounds dated. Indeed it's amazing how fresh much of this music sounds, "Ceres Motion" in particular could be played in open-minded clubs without raising many eyebrows, partly due to it's relatively funky synth bassline, but also due to the recent fascination with all things analogue. Compositionally, a strident minimalism is the dominant motif, and it comes as little surprise to find that Philip Glass is a close friend of (groupleader) Borden's. Many of the pieces here are reminiscent of Glass, featuring repetitive melodies layered over sustained synth washes. The 1972 track "Music" must be a pretty early example of sampling, featuring a 10-second burst of cloying 50s pop from which a half-second loop is stolen and repeated, which I guess forms a proto-breakbeat. With layered bursts of frenetic Moog, we have another strangely contemporary-sounding piece of music, its age only really discernible via the timbre of the electronics and the vaguely quaint melodic touch at work. While the up-tempo tracks are the most obviously earcatching, "Cloudscape For Peggy" and "Train" (both 1970) are actually the deepest ambient experiences - extremely lovely liquid drones. Over the course of the seventies, Mother Mallard faded from view somewhat, and Borden moved on to run digital music courses at Cornell. However, with the release of this fine retrospective and with a performing version of the group reforming this year, perhaps now Mother Mallard's Portable Masterpiece Co. will get the recognition they clearly deserved
Posted by Zen Archer at 11:37:00 AM 3 comments: