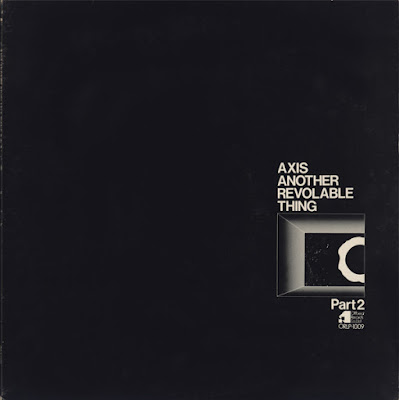 Recorded September 5, 1975, Yasuda Seimei Hall, Tokyo. Correct title of the album should be "Axis Another Revolvable Thing" but the covers were misprinted. 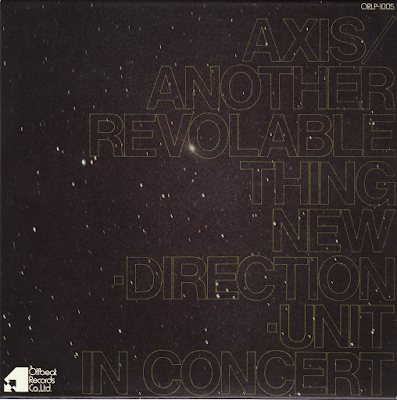 
Anyone who is called a jazz musician by other people or who confidently applies the term to himself is bound to have at some point pondered the question, "What is jazz, anyway?" such a person, moreover, is sure to have ruminated on the thought,  "How should i play my own jazz?"

It is these two themes and the connections between them that determine the person's musical Aesthetic. What's most important, though, is how deeply and widely he explores them and whether or not he thinks about them each day of his music-making life. this is the measure of his music's weight. simply put, it's the point where the difference between a jazz player (sound  generator) and a jazz musician (creative artist) comes into focus.

Masayuki Takayanagi has used a number of terms to describe the thing he is pursuing. first it was "jazz," then "real jazz," and, now, "non-section music." the terms have changed, but takayanagi's autonomy has remained constant and his motivation has changed not one iota. in fact, over the nearly three decades since he first took up music as a boy, He has continuously deepened and broadened his explorations. and he has always played tomorrow's music today.

Masayuki Takayanagi was born in Tokyo on december 22, 1932. at the age of 16 he began studying jazz and contemporary music. His talent was recognized early on and soon he was sharing stages with musicians like Toshiko Akiyoshi and Akira Miyazawa. During the period when he played at gin paris [a ginza club where free jazz sessions were held], he essentially served as leader,  Along with Hideto Kanai. Takayanagi formed and disbanded several groups before launching New Direction in the summer of 1969, from which point he plunged headlong into freeform jazz and developed a playing style full of destructive power. he is a revolutionary of japanese jazz and a seeker of eternal upheaval. as a guitarist, too, he is unarguably a leading figure not only in free jazz, but in all jazz formats.

"For me, playing free jazz is a necessity, and it's also theory," says Takayanagi firmly. this creed certainly stems more from his personal perspective on time than from his experience. As for theory: having applied a systematic logic to the tracks left by his intentions and to his progressive orientation, Takayanagi originated and maintains a unique and sophisticated theoretical system. this is evidenced in his methodology, With its twin nuclei of "Mass Projection" and "Gradually Projection."
From within his own musical theory and repeated musical actions, he attempts to approach something even more essential. this sort of orthodox method is seldom encountered in the world of jazz. Takayanagi is not only a formidably skillful and talented guitarist, but an artist continually and comprehensively rethinking his point of view and his own musical character. While New Direction Unit's powerful performances may seem emotion-driven, we must always remember that they are built on a fundamental methodology, and that there is a well-defined logic on the other side of the performance space. for this very reason, the group's music distances itself austerely from simple eruptions of feeling and facile expressions of sentiment, and creates a world utterly different from that of "go with the flow"-style music.

Consequently, those who listen to this group from a superficial jazz perspective will find its music extremely hard to fathom. genuine things must be approached in a genuine way. if you dispense with established jazz ideas, you'll be carried along by the music and afforded both a glimpse into your innermost self and a mental trip into outer space.

Drifting through all of new direction unit's music is the scent of blood. not old, clotted blood, but fresh blood. this isn't a mere semblance of music; it's sound through which the blood of living human beings has passed. which is why, in the group's performances, blood seethes, flows against the current, burns, oozes, rises, congeals, is spewed out, gushes forth. vivid red blood. Takayanagi's ultimate artistic aim may well be the color of this blood. blood calls forth blood. for these four musicians, playing music together essentially means drinking one another's blood. this could be regarded as a secret signing-in-blood ritual that, in turn, calls for solidarity from the audience. truly, circumstances and art are instantaneously united in this place and time. to borrow the title of a Koji Wakamatsu movie, "Blood is redder than the sun."

If we consider the physiological motif of blood as one extreme, we can say that the concept of completely physical "mass" is the other. in fact, very few things convey the quality/mass opposition as effectively as new direction unit's sound. take volume, for instance: it may be faint in some tunes and deafening in others, but in either case it is based on a carefully selected tone quality. even as a piece unfolds, sonic quality organizes mass and mass determines quality. what's more, quality transforms into mass and mass gives rise to new kinds of quality. it's as if the feedback between mass and quality were on an endless upward spiral. the consciousnesses of all those who happen to be present--musicians and listeners alike--soar upwards. where are they heading? Towards the blackness of outer space, where the mind is completely free. perhaps we've taken possession of time at last.
Or perhaps, as the hollow earth theory holds, it's possible for us to go and see the underside of the planet's surface.

To put it another way, this freedom is amphibian. the pleasant sensation we derive from dangling our hands and feet in water is something far removed from the tribulations of daily life. Indeed, when we listen to new direction unit we're completely steeped in sound. on September 5, 1975, the concert "Another Revolvable Thing" (so named by Takayanagi himself) was held at Yasuda Seimei Hall in Shinjuku, Tokyo. the performance provided a glimpse of a wondrous planet. in a sense, this album is a photo of a heavenly body--a print of a planet's sunlit side.

Fragment III - A percussion solo by Hiroshi Yamazaki. this tune demonstrates how powerful a player Yamazaki is and how very carefully he considers the organization of the whole. he's more than just a percussionist; he makes us aware of everything from body/space interaction to the origins of sound construction. Yamazaki was born in Tokyo on March 28, 1940. he began to make his mark in the Gin Paris period and had his own group for a time. in 1970 he joined New Direction. his experimental, ambitious approach has been widely praised.

Fragment VI - In this Mass projection piece, sound clusters issuing from the limits of physicality collide, pile up, and hurtle headlong in all directions. It's the energy of thick magma. in accordance with instructions given through Takayanagi's feedback technique, the flow of clumped sounds is gradually accelerated and taken all the way to the void of outer space. sound makes consciousness float. Supreme ecstasy comes about only in this extreme place.
Posted by Zen Archer at 11:45:00 PM 2 comments: Links to this post 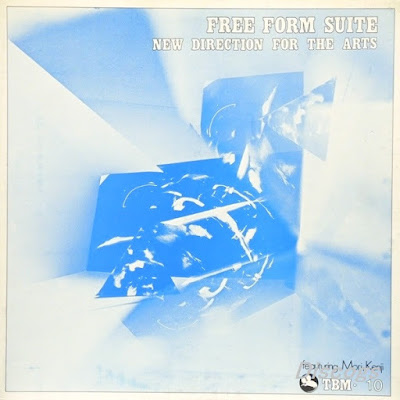 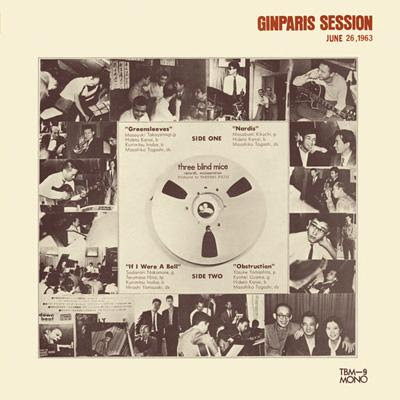 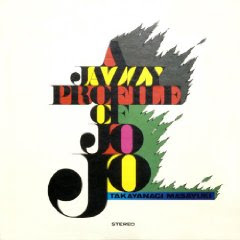 
Pioneering Japanese free improvisation guitarist. Born 22 December 1932 in Tokyo, turned professional in 1951, and formed the first of many groups with the New Direction moniker in 1954. Was a leading member of every avant-garde movement in Japanese jazz from the fifties onwards.
Towards the end of his life Takayanagi moved into complex 'Action Direct' works for tabletop guitar, tapes and electronics that verge on pure noise in their intent.
Died 23 June 1991.
Posted by Zen Archer at 6:35:00 PM 2 comments: Links to this post 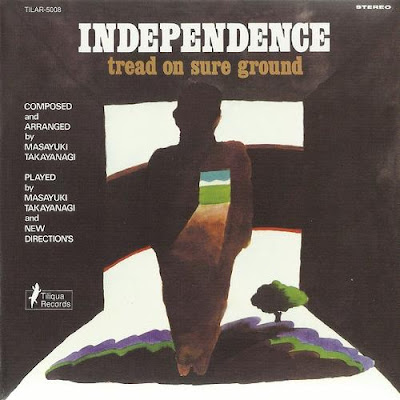 Recorded 18 September 1969, 17 January 1970.
All music and arrangements by Masayuki Takayanagi


Masayuki Takayanagi (1932), a veteran of Japanese jazz bands since the late 1950s, when he led the Swing Journal All-Star Orchestra (october 1956) and the New Directions Quartet (september 1957) and the New Directions Quintet (march 1958), was one of the earliest noise guitar improvisers, and the first (with Keith Rowe) to use the table-top guitar. Flower Girl (1966) and The Smile I Love (Jinya, 1966) were recorded by a quintet led by the guitarist. We Now Create (may 1969), with the side-long Variations On a Theme of Feedback, was recorded by a quartet of guitar, percussion, trumpet and cello/bass.
In 1969 Takayanagi formed his New Directions trio (initially Motoharu Yoshizawa on bass and cello, Yoshisaburo Toyozumi on percussion) that proceeded to record Independence (september 1969 - Union, 1970), Call in Question (march 1970 - PSF, 1970), with the addition of Motoreru Takagi on sax,

La Grima (august 1971 - Doubt Music, 2007) documents a 41-minute free improvisation from august 1971 by the trio of Masayuki Takayangi, Kenji Mori on sax and Hiroshi Yamazaki on drums (New Direction For The Art).

Free Form Suite (may 1972 - Three Blind Mice, 1972), with the three-movement Free Form Suite, credited to New Directions For The Arts with Kenji Mori on clarinet, flute and saxophone, Jazz Guitar Forms (november 1973) for a quartet with Kenji Yokoyama on piano (two side-long jams, Collabolation and Straight Away), April Is The Cruellest Month (may 1975), credited to New Direction Unit but still a quartet with Kenji Mori and a rhythm section, Eclipse (may 1975) and the double-LP Axis Another Revolable Thing Parts 1 & 2 (september 1975), all with the previous line-up.

Cool Jojo (december 1979) was credited to Second Concept (Kenji Kousei on piano and the usual rhythm section). The more traditional solo guitar album Lonely Woman (august 1982) was a tribute to Tristano and Coleman. Pulsation (may 1983) was a duet with percussionist Masahiko Togashi. Dislocation/ Alternative (december 1983) and 850113 (january 1985) were credited to Angry Waves. Mass Hysterism in Another Situation (august 1983) was recorded by a New Direction Unit that featured a second guitarist, Akira Iijima. Follow The Dream (november 1984) was credited to Masahiko Togashi (a percussionist) & His Improvisation Jazz Orchestra.

The five-disc box-set Archive 1 (Which I still not have) (Jinya, 2010) collects five live performances.