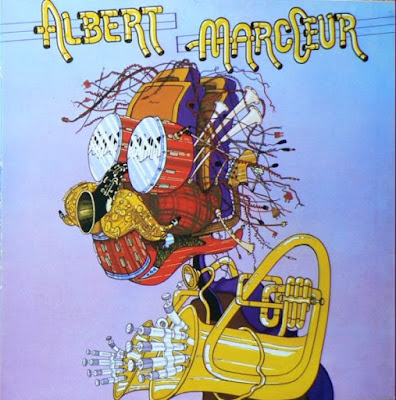 
ALBERT MARCOEUR, French multi-instrumentalist/composer, was born on December 12 1947, in Dijon, France. During his formal education of clarinet at the National Academy of Music and Dance of Dijon, Marcoeur actively participated in many straightforward college rock 'n roll bands. Closing an end to his formal training Marcoeur's musical visions had gravitated towards the experimental facets of music, wishing "to do nothing else but make my own music".

In 1970, the realisations of Marcoeur's 'unclassifiable' forays found their conception, marking the being of studio life. It was to be another four years until the release of his first self-titled album, which still ranks as his greatest recording to date. Loosely classified as proto-RIO chamber-rock, the album lays down several RIO foundations [much like Robert Wyatt's, "The End of an Ear"], later to be picked up by the likes of Aksak Maboul. As with all great albums, controversy was only a step around the corner, with a helping hand of an unauthorised 'loan', the albums closing bars containing "two two-note chords that I had found on a jazz classics album".

While embracing the 'avant-garde' in the true sense on of the word, Marcoeur's compositions took a tight but balanced approach, giving even the most absurd noises a homely feel. Smitten with humour, Marcoeur has more than once been hailed the French reply to Zappa [though less prolific]. Historically his influence cannot be denied, producing another three albums of high calibre, before wandering off into more clichéd avenues.

There are few albums that are really and truly groundbreaking in the history if rock, but in its opposition subgenre, they seem to abound. But if RIO was groundbreaking, they had to come from somewhere to base their sounds and directions, and three of them were Soft Machine's Third and Wyatt's End Of An Ear, and Samla Manna Mamma's Maltid. Another is obviously Albert Marcoeur's early works, and certainly his self-titled debut. While Marcoeur has often been cited as the French Zappa, I often found that moderately satisfying and partly exaggerated, not only by the width of their respective works, but also by their
Indeed, both frequently delve in avant-garde music and have a certain sense of humour (although Albert does not have Frank's derision), but Marcoeur's music is not as accessible as Zappa. Marcoeur involves his brothers for choirs with François Breant (see his entry), but his main musical pal is Patrice Tison on guitars, bass and even keyboards when needed, while Albert drums and blows in wind instruments mostly, but explores

I'm a bit of a late-comer to Marcoeur as I'm discovering his works over three decades after their initial release, but I find that I'm filling in an immense void in my musicology, as I also delve in Hector Zazou (still to be included as I write now), whom I would consider Marcoeur's spiritual son. Musically this is not far away from Stormy Six's L'Apprendista, mixed with a bit of Maltid. After the almost punkish C'est Raté, which offers a few grins as the music tries every directions to come back directly to itself, There is an instrumental Simone that starts gloomily over an alarm siren, before ending on a calmer line. Tu Tapes Trop Fort (you hit too hard) seems to be the logical follow-up of C'est Raté, not only sonically (same universe), but lyrically trying to violate a safe.

Appalderie recalls Simone's siren alarm at first before dissonant for the first time on the album and the album's centerpiece Que Le Temps Est Long , a lovely intimate song interrupted by a violently intrusive chorus. The darkest and most impenetrable track is P'tit Champs De Pomme (small applefield) where the music has definitely swung dissonant, and most likely improvised, sometimes reminiscent of Italy's Area. Closing (already!?!) on the album-longest and very percussive Qu'est Ce Que Tu As, (what's wrong with you? In this case) with a slow flute, the track soon embarks on Samla-ian boat and the repetitive staccato rhythms are ending in a surprise way.

Although this album's reputation of being a foundation of RIO (and Etron Fou Leloublan were very influenced by it), Marcoeur's debut album remains very accessible despite the dissonant moment in the second-last track. An absolutely essential album if you want to know about how RIO came to be.