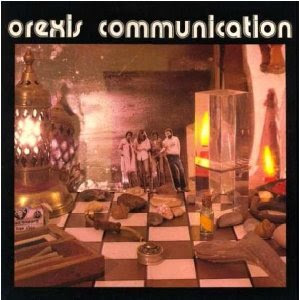 
This one doesn't disappoint. In fact this entry is one of the best, without a doubt. Here's a band / artist who maintained incredibly high musical and imaginative standards through 5 albums -- Orexis, Inspiration, Reflection, Communication, and Georg Lawall Live, without really letting up at all the progressive spirit (similar to Alcatraz). This last album takes us out to 1980, when the world had pretty much given up on progressive music, but here nestled in Deutschland we still see the eagerness to fuse together every strand of human audiological experimentation: folk, classical, jazz, and blazing-fast virtuoso playing. The one element missing is the electric guitar. I cannot believe how sustained the compositions are and how unfair it is that Georg Lawall's work is lost to posterity and I hope the artists see it the way I do -- to share this immense priceless treasure from the past with as many people as possible.

I was excited to see the remarkable Budi Siebert playing saxes and flutes on this record along with Georg Lawall and the rhythm section of Lauer and Koinzer. What an incredible, amazing musician Siebert was / is and you can hear it in every note he plays on this set. Everything he touched turned to gold in this period of time.

We start with a quick uptempo ethno-folk jazz number called "Six o'rock." Here, use of the whole tones throughout make for a very interesting dreamy sound despite the uptempo. Thereafter a very beautiful evocative flute song called "Septemberly" really showcases our man Budi. Despite the old school jazz title this is a very progressive composed piece with odd changes.

The last piece on side 1 is another beautiful acoustic composition with an odd title (as seems the case throughout this record); it weaves together all kinds of gorgeous strands before kind of drifting out into nothingness at the end. Note the use of bowed playing of the double bass for deep sustained bass notes, later moving on to a cello-like use of plaintive high string notes with the bow. As mentioned before, these sustained notes on cello or (as here) on double bass always evoke the feeling of plaintive lamentation.

Side 2 opens with the awkwardly named Thelonious Harmonious, dedicated to Hermann Hesse (because of Siddhartha?). Part 1 (Communique) includes the Herbert Klein Tenor and altussolo and the choir of the god-vibration-monks introducing us with a classical choir composition getting us into a nice funereal mood. It passes into a pretty standard acoustic guitar E minor pattern with Budi's soprano sax singing out the song into more progressive territory (Vita Posterior). Really awkward title considering this song seems to be about reincarnation and death and has nothing to do with Thelonious Monk, musically.

Again the bassist is highlighted with a song, called "Bassicly". I admit to being a bit disappointed by this one slight dip in the musical quality since for the most part we hear an extended bass solo. The next track is one of the those typical german ethno-folk languorous slow evocative sunrise tracks with sitar playing from Lawall, e.g. Agitation free, Embryo, Dauner's Et cetera, etc. At least it builds up a bit of interest with Budi bringing in some sax winds to blow away the torpitude. Unfortunately we then get treated again to the descending minor guitar pattern (Led Zep's Babe I'm gonna leave you). This is the track that is co-written by Siebert. Probably this means it was mostly improvised.

The final track is a humourous jazz guitar thing. We've seen this on Lawall's records before. It reminds me a lot of association pc's toto blanke, which was almost 10 years before this record, showing how early and advanced association pc was in the sphere of complex euro-jazz.
Posted by Zen Archer at 5:59:00 PM