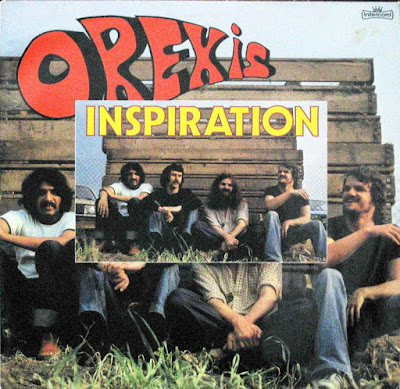 In 1978 Lawall's Orexis were set for a new album.The line-up was expanded to a quartet with two percussionists, Gert Kilian, who played in the first album, and Trilok Gurtu along with Wolfgang Lauer, who replaced Erik Erker on double bass.The second work of Orexis was again recorded at Tonstudio Bauer in June 78' and released on Intercord Tontraeger.

Once more an Orexis' album is centered around Lawall's classical and 12-string guitars along with his composing talents with seven out of the eight tracks written by him, except ''Orientierung'', credited to Lauer.Orexis continue on their long experiments between jazzy improvisations and Ethnic orientations, blending Latin and Eastern influences with the free spirit of Jazz.The true difference with the first album is the fact they included a couple of more Prog Fusion-oriented pieces with a very energetic rhythm section and Lawall's dripping acoustic strings delivering plenty of stops and runs.Otherwise ''Inspiration'' hardly moves away from the familiar crescendos of Orexis' leader, supported by vibraphones, double bass and different percussions.Again the album has a strong academic feeling and leans towards experimental forms, focusing in the possibilities of freedom through music than any kind of structured ideas.

The pair of well-performed Fusion tracks is the main reason ''Inspiration'' is a bit better than Orexis' debut.Still this work comes recommended mostly to fans of Experimental Folk and Jazz.