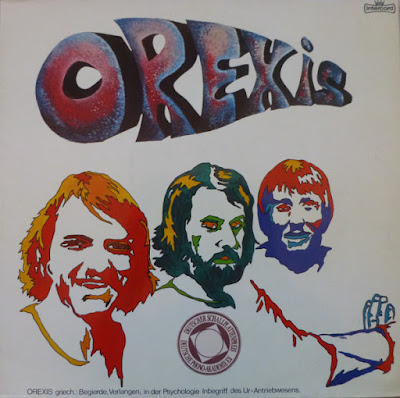 Orexis was more or less a German project created by guitarist Georg Lawall back in 1975.Their first work included also bassist Erik Erker and Gert Kilian on drums and various percussions, it was recorded at Tonstudio Bauer in Ludwigsburg between February and March 1977 and eventually released the same year on Intercord Tontraeger.

This is mostly a hybrid of Ethnic Jazz and World Music but not in the sense of KRAAN,this is basically an acoustic album with a very ''live''-like atmosphere, sounds a bit like full rehearsals at moments.Lawall uses classical guitar along with sitar and Kilian performs also on congas and bongos, the result though is a mixed bag of mellow jazzy atmospheres, sometimes closer to Lounge Jazz.The album actually suffers from the one-dimensional moods created constantly by the guitars and bass, which really dominate it, along with some overstretched individual solos, which are rather monotonous.Aa a result, ''Orexis'' could easily be used as background music, as it lacks any kind of energy and dynamics, though the musician perform with passion, no question about it.On the other hand the few full-blown jazzy passages on the first tracks with the members in orgasm indicate that Orexis were a band with true potential, but as it unfolds, the albums tends to be boring with much of a sef-indulgence feeling.

As with the Lucia, MccLaughlin and Di Meola trio, Orexis' debut would really have been a better effort if captured on a live footage, this is mostly music for seminars and not a world-wide product, even for prog fans.However the band won the prize for ''Musik Newcomer'' with this album and this fact says a lot about them.
Posted by Zen Archer at 5:27:00 PM