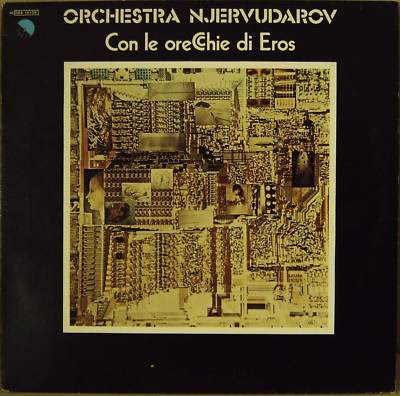 
Orchestra Njervudarov was an Italian chamber rock/RIO band that released one album called Con le orecchie di Eros in 1979. However, they are rarely mentioned when RIO is discussed or even when one mentions Stormy Six, their fellow countrymen. And yet, this is an accomplished album quite deserving of recognition, especially given its year of release. This album has, as mentioned, a chamber rock/RIO sound as well as some jazz influences in it. There is one track (Rapporto Njervudarov sulla teoria degli opposti estremismi ) which is probably a sort of joke as it is a new wave/disco song and it is totally out of place here. But all the other tracks will reward the RIO/chamber rock and jazz-rock fans. This will be probably impossible to find and it's a shame. If you do have the chance to listen to this, don't hesitate. It might not be the best RIO album you'll hear but it sure is worth your time.

This album was released by EMI and got poor promotion and due to its limited edition got quickly out of stock and so was not known to many people. It has never been reissued on vinyl or CD.


An amazingly rare album from Italy! Orchestra Njervudarov "con le orecchie di eros" it's a very curious and intresting recording from 1979. Actually the name of the band has been chosen only for the LP recording, the real name is actually Frogs. A very nasty quintet made by some great musicians and most of them seems still in musical scene, for example Roberto Costa made some arrangements for some famous musician for example Lucio Dalla, Ron, Gianni Morandi and even Luciano Pavarotti, same thing for Bruno Mariani. Adriano Pedrini it's a music professor and seems he is keeping teaching for some musical school in Italy. The album itself it's incredible, there is a lot of jazz, canterbury and avant garde chamber music influence, it's hard to describe the sound of this group. Take Picchio dal Pozzo and blend it with Universe Zero music, then add Area rhythms and passage and fill everything with some dark but immense and wide atmospheres. It's the best i can do for describe this album quickly for give an idea of this LP.

The album opens with Tot Stelle Reflex, a fast and very complex song! A great way to open an LP! You can sure notice a great work of bass and drums lines, simply fantastic! The instruments in this songs are like a puzzle, every part it's studied to attach to the other, and create a great mosaic of sounds and atmosphere! The ending also it's amazing too!

Next is Spleen Codice Notturno. This one it's more linear and smooth respect to the last one, it have more jazzy tunes and it's less complex. The sax fill most of the song creating some nice atmospheres. The keys are ok too, overall this song is also ok.

Una baldoria verticale begins with a drum riff and slowly the other istruments comes in with some difficult and complex patterns. The piano creates great passagess which are totally freaked. Most of the songs seems jazz improvised, but at last you can hear some nice guitar passage which slowly end the songs.

Another great song is Tristessa, which is one of my favourite here. It start with a smooth introwith synth and piano. The other instruments follow in creating some good atmosphere with. Also this track it's more linear respect the other one. It got some good taste of chamber music, remind me a bit Univers Zero or Henry cow in this one.

The we have Rapporto Njervudarov sulla teoria degli opposti estremismi which is one of very highlight of this LP! Surely if you're not italian you cannot understand or enjoy this track, beacouse it's joke track joking disco music and early punk. I think they have done this beacouse a lot of times italians talk english without kwnowing the words they are singing, infact a lot of times you can hear something like "PEOPLE DANCING" or "mmm... SEXY" without any counsistancy or meaning. The punk part it's also cool too, maybe the funniest part of this track and again it's full of nonsense and here you can hear something like "I've discovered america, iv'e invented the warm water" or my favourite "I ALWAYS DO THIS GRIND VOICE"! This song, for its consistancy remind me a lot Elio e le storie tese if you know what i'm talking about. You don't have to be serious to enjoy this song, just have some fun!

Now the LP becomes serious again, and we have Toujours l'amour, another outstanding and complex track like the first one, with a good use of synthsiezers, nice guitar phrases, great passage and tempo changing!.. as the first song it's hard to describe something like this, it's something that you have to hear!

Last track it's Il montaggio delle attrazioni / Sinfonia Erotica and again it's another strange avant grade song! it's the longest song so far but i don't know where Il montaggio delle attrazioni ends and Sinfonia Erotica begins... Maybe when the piano begin improvising... i don't know! Anyway it's again something very original with complex passages and immense atmosphere!...

It's been hard to describe this album, a reason more to hear this album, becouse i haven't been clear so much! (and my english it's not good...) Orchestra Njervudarov's "con le orecchie di eros" it's an excelent album and i ask my self why there isn't still a cd release or a vinyl reissue?! This is a very courious record and deserve to be heard by many progressive rock fans! The only reason why i don't give this album 5 stars it's beacouse it's hard to find and maybe it not worth as other R.I.O. albums. But i personally recomand this album becouse it's original and unique, maybe a lost classic! Recomand to every R.I.O., jazz, chamber rock and canterbury scene fan!