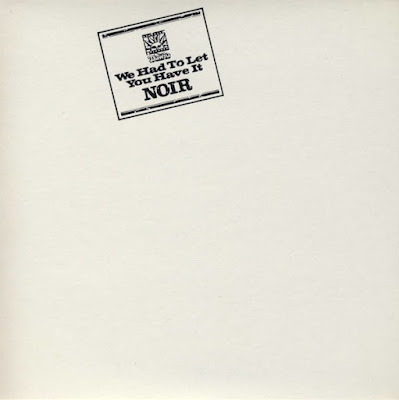 
Apparently the title comes from Dawn themselves as the group spent hours in the studio, didn’t finish the record, and just up and left. This is a very difficult record to describe. To start with, it’s different than anything else I’ve heard from this period. Overall the record is heavy on the keyboards (organ, piano) and is VERY percussive in nature (no drum solos though). Plenty of good wah-wah and fuzz guitar solos as well. The 9 minute opener is dog slow with an almost gospel tinge to it (the vocals throughout have this spiritual, almost Native American feel). It picks up the pace considerably from there. Has a strong white boy R&B vibe, as if Rare Earth recorded an album for the Dawn label. Also hear slight references to Indian Summer as well.


I would have given six stars to the album if I only could. An album of pure gold and still almost total mystery - after so many years. In 1970 a band named "Noir" ("Black" in French) had spent ages recording this undisputable miracle for "Dawn" (that was the label of Mungo Jerry also). How did they get there, and where from, I don't know. They were: Barry Ford - lead vocals on half of the songs, drums & percussion; Tony Cole - lead vocals on other half, organ, piano and keyboards in general; Roy Williams - bass and vocals and Gordon Hunt - guitar and vocals. The band split before completing the album, and vanished from the studio - all attempts to disover their whereabouts failed. Barry Ford re-surfaced later with "Clancy" which recorded two albums for Warner, and had some following on London pub-scene, and after that performed with another obscurity, "Merger".
Anyway, music is difficult to identify, and this is ungrateful and absolutely unnecessary: several slow ballads which remind (somehow) Ken Hensley - like eponimous fatalistic lament of "Rain" with heart-breaking singing; philosophical sermon "In Memory Of Lady X"; tribal battle hymn of "Beggar Man" and spirituals-inspired "How Long"; solid prog of "The System". Add polyphonic vocal harmonies, virtuosos guitar and cool jazzy piano - total abandon and delight!
The music was too good to be left on a shelf, and the album was released by "Dawn" in 1971, to be re-issued on CD by "Arcangelo" in Japan.  One of the best albums of the 70s, I kid you not...
Posted by Zen Archer at 1:54:00 AM