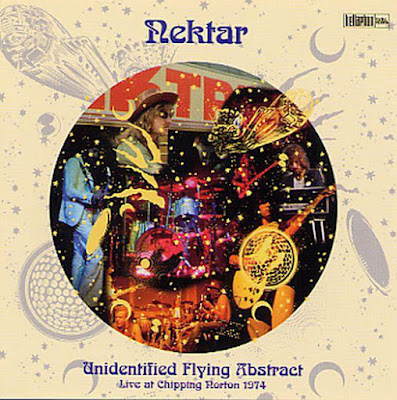 
In the beginning of 1974 Nektar were busy finalising their latest recording effort "Down to Earth". On March 27th 1974 they entered a recording studio in a town called Chipping Norton to celebrate bass player Mo Moore's birthday. They celebrated it with a live-in-the- studio jam session. This session, which took place between 2 am and 5 am, was recorded and now released on this cd. From the six songs, five were new and only one "Desolation Valley" had been released before (on the 1972 album "A Tab in the Ocean").
The cd opens with "Desolation Valley". A great dynamic, jazzy track with subtle guitar lines. "Oops - Unidentified flying abstract" is heavier and more jammy with a great spacy organ sound and a wah-wah guitar solo. The third track, "Mundetango", sounds great with the tango time signature. Next is the bluesy "One Mile Red" which flows into rock 'n' roll with "The Ticket". This will not really appeal to fans of progressive music. "We Must Have Been Smashed" is a jazzy piece with again wah-wah guitar and nice organ. The last track is "Summer Breeze". It is a guitar instrumental which was inspired by the descending chords of Yes' "Starship Trooper".

The tracks 2, 3 and 6 had already been released on the album "Sunday Night at London Roundhouse" together with two live recordings. But it is a good thing that finally the complete session is released on cd. Both sound and playing quality is excellent. The jam- character of the music makes it a nice album to listen to. The music is not very complex or inventive (except for the first track), but it just sounds good. It can be compared to the music that was released on the album "Sounds Like This".
Posted by Zen Archer at 11:48:00 AM