Nektar
1971
Journey To The Centre Of The Eye 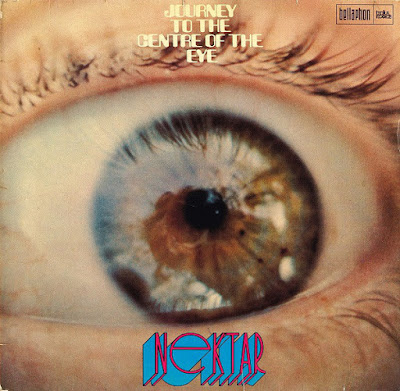 Folks unfamiliar with the band Nektar think they are from Germany. What actually transpired was the quartet of Englishmen met in Germany in 1969 and formed the band. Ron Howden (drums, percussion), Derek "Mo" Moore (bass, vocals), Alan "Taff" Freeman (keyboards, vocals) and Roye Albrighton (guitar, lead vocals) would become huge in Germany and nearly broke big the in the U.S.
Eclectic Discs/Dream Nebula Recordings have reissued the four critically acclaimed albums that defined the band's career. "A Tab In The Ocean", "Journey To The Center Of The Eye", "Remember The Future" and "Recycled" are lovingly remastered with detailed liner notes for former fans and the newly indoctrinated to enjoy. Their well- known masterpiece "Remember The Future" was appropriately chosen for the SACD format as well as "Journey To The Center Of The Eye".

Their sound was a progressive-psychedelic mixture of rock that was far ahead of its time. For this listener this was a new wonderful listening experience. Prior to receiving these CDs, I had not heard any Nektar music besides a video of "Remember The Future" on a DVD compilation. I can understand now what all the talk has been about the band reforming and going on tour.

Roye Albrighton was the driving force of this band. His skilled guitar playing set the table for his fellow band mates. Each recording was outstanding and stands as a testament to their importance to the history of prog-rock music. What made this so interesting was how the label broke up each album into two parts respectively, the original recordings versus the newly remastered versions. You are now able to hear succinct differences between the two formats for the first time. Both versions are excellent and it was a treat to get the best of both worlds.

An astronaut lifts off for Saturn. En route, he is intercepted by aliens who had been studying Earth for some time and were perplexed by our war-mongering ways. They offer to show him life as they know it, a journey he undertakes both to a far-distant galaxy yet inwardly into his own psyche, a mind-expanding trip into the 'All Seeing Eye' which teaches him that all he seeks can be found here on Earth. But Earth is heading for a nuclear war ....
For a new band to undertake a complex concept for their debut recording showed at least they had no lack of ambition. It was recorded in a tiny German studio live-in-the-studio on 8-track equipment, filling any remaining tracks with overdubs as necessary, producing a technically excellent album far exceeding its humble origins. The sound is typical of its time - rough edged and unpolished, free from overly slick production or too many fancy electronic gizmos, revealing an energetic simplicity often lacking in modern music.

Instrumentally, what you get is essentially the core Nektar live sound, ie guitar, keyboard [mostly organ and Mellotron], bass and drums with just a few effects thrown in. This, the start of their journey through Prog-land, betrays its origins in the psychedelic world of the late 60s. The effect is probably best described as Psych Space Prog, which is entirely consistent with the subject matter: weird subtle effects; distorted or chiming electric guitars; prominent use of Hammond organ as a lead instrument; a 'complex' musical structure; and, dreamy floating sequences, sometimes with processed vocals depending on context.

Highlights are many, but this album is more about the flow through its entire 42 minutes than picking out individual pieces. Aside from a split half way through Dream Nebula [to enable it to fit on both sides of a vinyl LP] it is a continuous work, progressing through a sequence of movements as the story unfolds. However, my own favourite episodes are the instrumental Countenance which develops from a beautiful dreamy start into a mid-tempo spacey jam, and an achingly haunting Burn Out My Eyes simply oozing with anguish as the astronaut pleads for his sanity.

It has to be said there are times when neither lyrics nor music appear to illustrate the story in a literal sense, but the overall effect is mesmerising - close your eyes and you can imagine the journey into outer and inner space, you can feel the astronaut's sense of wonder at the magnificence of the universe, his pleasure and pain of knowing all things, the burden of seeing the future destruction of his homeland.

As with their other albums, Journey To The Centre Of The Eye has recently been re-mastered and re-issued by Dream Nebula with a useful pair of bonus tracks. The jewel in the crown though is an SACD layer containing a stunning 5.1 surround remix of the album, complete with the two halves of The Dream Nebula stitched together as a single track. Packaging is, as ever, excellent.

I can find little to fault. It is a product of its age, marrying the outgoing sound of psychedelia to new Progressive ideals of the incoming decade, yet in many ways ahead of its time, foreshadowing the emergence of both Space Rock [Hawkwind, Floyd, Eloy] and Prog [ELP, Genesis, Yes] as major musical forces. Debut or not, this is an astonishingly accomplished work which deserves to be considered a masterpiece alongside its more commercially successful peers.
Posted by Zen Archer at 11:54:00 PM