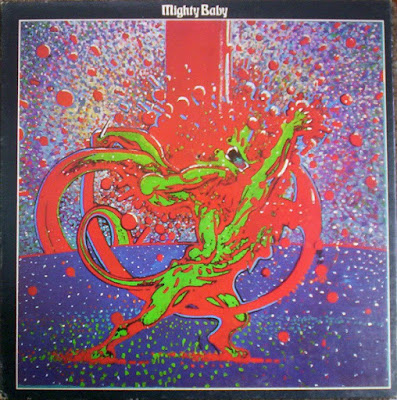 
UK act MIGHTY BABY was formed in 1968, featuring several members of the newly disbanded outfit The Action. They hit the studio right away, and had an album ready by the end of '68, which eventually was released at the tail end of 1969 on the Head Records label.

During 1970 many of the members in the band converted to Islam, and when their second album A Jug of Love appeared in 1971, the alteration in religious and philosophical view by the band's members had also affected their stylistic expression, resulting in a vastly different sophomore effort.

This second production also proved to be the final albums to come from this band. In later years archival cocncert recordings have surfaced from time to time, capturing a band keen on improvisation while performing live.


An overlooked late-sixties psych-rock gem, Mighty Baby's self-titled 1969 debut somehow got lost amongst all the 'Atom Heart Mothers' and 'In The Court Of The Crimson Kings' upon it's initial release. Although a fairly straight-forward of R'n'B, folk, rock and psychedelic influences, which, technically-speaking at least, is closer in spirit to the likes of The Beatles, The Doors and Jefferson Airplane than it is to any of the genre's popular progressive rock acts, 'Mighty Baby' showcased an inventive and surprisingly-experimental outfit whose West coast-leanings contrasted nicely with their UK beat-group origins. Songs, such as the impressive, country- flecked rocker 'A Friend You Know But Never See' start as seemingly-simplistic late-sixties psych-tinged rock, before breaking headlong into complex, overlapping rhythms that spin off into Jerry Garcia-inspired oblivion and back again via semi-progressive instrumental passages that feature Cajun violins, bluesy-guitars and folk-pressed vocals. Fans of The Grateful Dead, Quicksilver Messenger Service and Wizards From Kansas, as well as early rainy-day UK psych purveyors The Move, Tomorrow and The Magic Mixture should find much to admire on this enjoyable album, and whilst there may not be the complex keyboard passages, rampant experimentation and surreal conceits that ordain the best 1970's prog, Mighty Baby's brand of all-encompassing Beatles-ish psych-folk-rock remains refreshingly unique.
Posted by Zen Archer at 12:20:00 AM