Man
1972
Be Good to Yourself at Least Once a Day 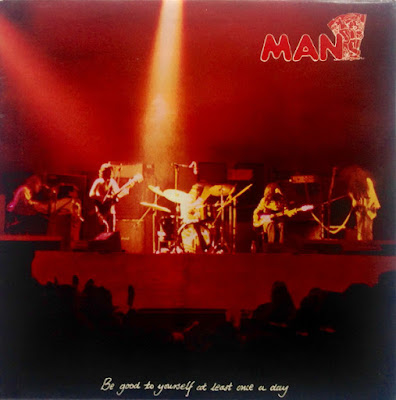 Be Good To Yourself At Least Once A Day is a bit of classic in the Man catalogue, not least because it contains the classics C'mon and Bananas which have been live favourites since this release in 1972. The album only contains four tracks so there's ample opportunity for the band to stretch out on the Psychedelic west coast influenced jams much like they do live.
This original version of C'mon sets a fine standard for the rest of the album to live up too. Less frantic than it usually is live it starts with a wonderful Micky Jones guitar riff familiar to all Man fans before settling into an easy groove courtesy of inventive drummer Terry Williams. Things are taken down a notch for the instrumental Organ dominated mid section before some of the bands trademark harmonies bring us back in to where we started. As testimony to the greatness of this track is it must have made more appearances on Man live albums than any other song by the band some of which are even better versions than this one here.

Keep On Crinting keeps the standard high with some lovely guitar picking and a great Williams shuffle on the drums. It's an instrumental with Phil Ryan's Keyboards (not always an instrument present in the band line up) given equal rein to the guitars of Jones and Clive John. (Yes, no Deke Leonard here who must have kicked himself for missing out on this one).

Bananas opens side 2 of the original vinyl version and as already mentioned was to become another Man classic with it's jagged rhythmic structure, though a more steady groove prevails, at least in part for the excellent instrumental interplay of the mid section which builds up to a frantic pace before things calm down again to fade out with some spacey guitar work.

Life On The Road closes and is a bluesy shuffle propelled by Williams and bassist Phil Youatt. Once again between the vocal sections there's space for instrumental workouts and although it's probably the weakest of the four tracks it's still an enjoyable listen not least for the guitar interplay between Jones and John.

This comes close to being the very best of Man studio albums but is just beaten by the brilliant Rhinos, Winos and Lunatics but due to the inclusion of the essential C'mon and Bananas makes it the perfect place to start your Man collection from.
Posted by Zen Archer at 9:37:00 PM