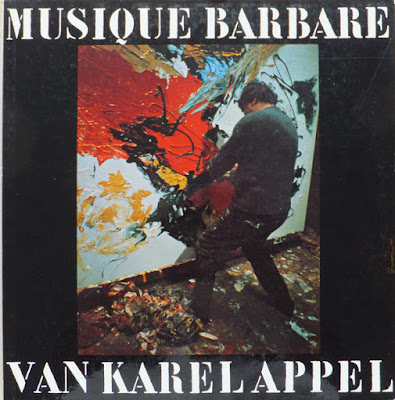 Thick gatefold cover and 30-page illustrated book attached inside the gatefold cover, some copies came with an original painting by the artist

In 1963, Dutch abstract expressionist painter Karel Appel (1921-2006), who cofounded the avant-garde Cobra movement in 1948, booked time in the Instituut voor Sonologie in the Netherlands to compose music for a documentary that cinematographer Jan Vrijman was making on Appel’s work. Originally released by Philips, this masterpiece of musique concrète is a real jewel for any record collector. Made in collaboration with Insituut member Frits Weiland, Musique Barbare is a fantastic mix of electric organ fumblings, full-on riots of distorted kettle drum, and assorted percussion-room filigrees, assembled into an extremely edit-heavy suite with significant tape- speed manipulation.


Karel Appel performs music with the Institute of Sonology on this album, though his main profession was as an avant-garde painter. Perhaps, due to the extremely abstract nature of this music, it is more apt to analyse it in the way an abstract expressionist painting would be observed, such as one by Jackson Pollock. Both Pollock's drip paintings and Musique Barbare achieve significant freedom from the traditions of their respective media; Appel performs with no rhythm (at least, no sustained rhythm), no melody, and no structure. Both artists remove the obligation to represent things of the real world, and instead focus entirely on the form of their works. So, what are the aspects and methods of form that are explored in Musique Barbare?
The first piece, Paysage Electronique, gives equality to every degree in its entire range of dynamics. Often, loud passages of noise will retreat into moments of silence, sometimes instantly and sometimes through diminuendo. It also provides a balance between textures (thick and thin) and pitches. The use of the piano isn't too dissimilar to some free jazz, and expressions of high-pitched notes are balanced out with not only the percussive sounds in the piece but the rumbling of the lower-pitched noise sections.
What follows is Poème Barbare, which appears to experiment with layering moreso than the first piece. An artist's mantra, "I do not paint, I hit" is repeated, increasing in its layering while irregular percussion lines play beneath, and the words become more alien from the original language. This allows the speech to follow the same route of abstraction that music as a whole takes on the record; the words lose their meaning when they can no longer be clearly heard, and instead become anarchic screams that retain a degree of humanity.
The final track, Le Cavalier Blanc, begins with a forgettable percussive solo which is followed by a synthesised passage of music quite different to any other movement on the album. It again works as a study of layering as atonal chords and skittish melodies overlap one another creating different timbres of dissonance. The electronic music diminishes for a moment of spoken word, and then enters a movement which combines low frequencies with thick groupings of high pitches. When the musicians play melodies or chords in this piece, each particular range of pitches is paired with corresponding characteristics: lower notes are usually slower and less layered, higher notes are very rapid and randomly arranged in dense groups, drawing parallels to the sound of the percussion.
The main difference between Musique Barbare (or any music, in fact) and an expressionist painting (or any painting, in fact) is that a piece of music is temporal; moments of composition are heard one after the other. In a painting, or any medium of static visual art, everything can be witnessed at once. Karel Appel, a painter himself, responds to this by combining sounds with common "behaviours", and with other sounds, to allow each moment of time to have a great number aspects to be heard at once (pitch, texture, dissonance, etc), in just the same way many features can be picked out from a painting, all at once. 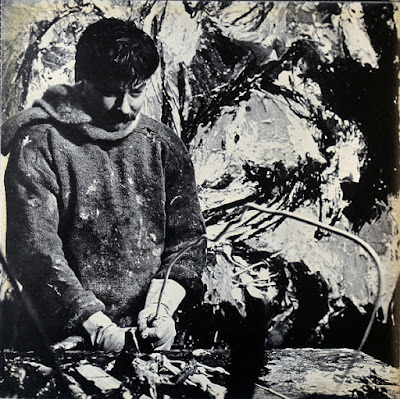