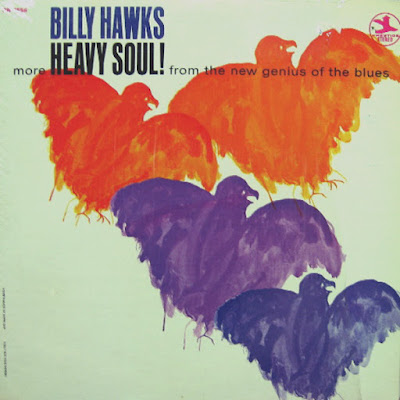 
After the disappointment of his debut album The New Genius Of The Blues, the pressure must have been on Billy to record a successful sophomore album. After all, if his sophomore album Heavy Soul! failed commercially, Prestige Records would most likely let Billy go. He’d be back playing live dates along the Eastern Seaboard. Billy didn’t want that to happen.

So, Billy had been busy. He’d written written seven of the nine songs on Heavy Soul! This included O’Baby (I Believe I’m Losing You), Whip It On Me, What More Can I Do, Heavy Soul,You’ve Been A Bad Girl, I Can Make It and That’s Your Bag. The other two tracks on Heavy Soul were cover versions. They were Henry Glover’s Drown In My Own Tears and Oscar Brown Jr’s I’ll Be Back. These nine tracks became Heavy Soul!

Heavy Soul! was recorded by Rudy Van Gelder’s at his studio in Englewood Cliffs, New Jersey. Producing Heavy Soul! was  Cal Lampley. Accompanying Billy were drummer Henry Terrell, guitarist Maynard Parker and Buddy Terry on tenor saxophone. Once Heavy Soul! was completed, it was released in 1968.

On the release of Heavy Soul in 1968, lightning stuck twice. Heavy Soul never came close to troubling the charts. However, on closer inspection, Heavy Soul! is another hidden gem.

O’Baby (I Believe I’m Losing You) opens Heavy Soul. It would become a club classic during the nineties, when Acid Jazz DJs rediscovered the track. It’s a hypnotic and irresistible call to dance. Billy and his band get into the groove and work their magic.

Drown In My Own Tears has a slow, spacious and moody arrangement. This is perfect for Billy. He delivers a soul-baring vocal. His vampish vocal is akin to an exorcism of hurt, pain and betrayal. The tempo increase on Whip It On Me, where Billy embarks upon another vamp. Again, the arrangement is funky, soulful and jazz-tinged as Billy heads in the direction of James Brown.

Jazz-tinged and soulful describes What More Can I Do? The arrangement supplies the jazz, while Billy’s hurt-filled, emotive vocal supplies the soul. Despairing and downhearted, he pleads his way through the lyrics.

Very different is Heavy Soul, an instrumental. It’s the perfect showcase for Billy and their band. They get an opportunity to showcase their combined talents. Then later, everyone gets their moment to shine. Billy like any good bandleader, doesn’t begrudge them this opportunity, realising that it’s for the album’s greater good.

You’ve Been A Bad Girl sees Billy move in the direction of soul, jazz and even rock, courtesy of the drums. His band lock into a groove and Billy delivers a despairing, needy vocal. He vamps his way through the tracks hoping, pleading and “you’ll come on back to me.”

I’ll Be Back has a much more soulful sound. Billy delivers an impassioned, hopeful vocal. He’s singing from the perspective of a soldier heading out to Vietnam. A braying tenor saxophone answers his call, adding to the emotion, drama and beauty of the track. This is a masterstroke and results in the definitive version of this track.

I Can Make It has a soul-jazz sound. Billy drops the tempo and sets the scene with his Hammond organ. Then when Billy’s vocal enters it’s needy, hopeful and desperate. He breathes life, meaning and emotion into the lyrics, against a mesmeric arrangement. The soul-jazz sound continues on That’s Your Bag. As the arrangement unfolds, it breezes along. Guitarist Maynard Parker unleashes some of the best guitar lines on Heavy Soul! It’s a jazz guitar masterclass. When his guitar drops out, Billy picks up the baton. He’s inspired to greater heights. So is drummer Henry Terrell. Together they ensure that Heavy Soul! ends on a resounding high.

Sadly, Heavy Soul! proved to be Billy Hawks final album for Prestige Records. It was also the last album Billy Hawks recorded. Never again, would Billy enter a recording studio. He spent the rest of his life playing at army bases, clubs and private parties. Billy traveled all over the Eastern Seaboard. Atlantic City, Jersey, New York, Philly and Virginia were home from home for Billy and his band. They played each and every one of those cities more times than they cared to remember. Billy was like a musical hired gun. Wherever someone was looking for an organist, he’d make his way there. He’d then entertain audiences with his unique blend of blues, gospel, jazz and soul. Audiences were won over by Billy and his three or four piece band. After that, they’d leave town and do it all again. However, this is what Billy loved.

For Billy, there was no greater thrill than playing live. Recording wasn’t the same. Maybe that’s why Billy never recorded another album. He didn’t get the same buzz out of playing in a studio. Whatever the reason, the fact that Billy Hawks never recorded any more albums was a great shame. This was music’s loss. We never got to hear how Billy matured and evolved as an singer and musician. That’s true in more than one way.