Yahowa 13
1974
To The Principles For The Children 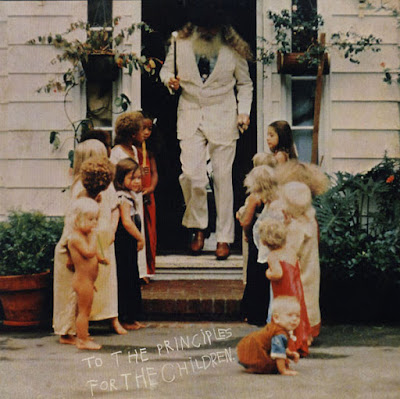 
The final Yahowa 13 project on which Father Yod appeared before his 1975 death is a return of sorts to the kind of record making he favored with his early Father Yod & the Spirit of '76 albums. As on those LPs, there are just two side-long tracks, simply titled "Side A" and "Side B," totaling about 25 minutes together (ending with kids chanting an ode to Yahowa). Perhaps these are a little more subdued than those early Father Yod LPs, and on a slightly higher instrumental plane, due mainly to guitarist Djin Aquarian's swirling palette of tones. It's generic Father Yod/Yahowa 13, if there could be such a thing: the psychedelic seer as stump speaker, perhaps. When he sings softest and deepest, he sounds like an amateur Tim Buckley; when (as is more often his wont) he sings louder, it sounds like Bruce Hampton, but far more annoying and sophomoric. The music lacks structure and melodic shape, and will strike most not as middling improvisation, but substandard, often loony strangeness, with a guitarist who seems too good for his company. When he squalls "You'll live forever!" at one point, it's hard not to get spooked, since he died in a hang-gliding accident (on his first hang-gliding excursion) shortly after the recording.