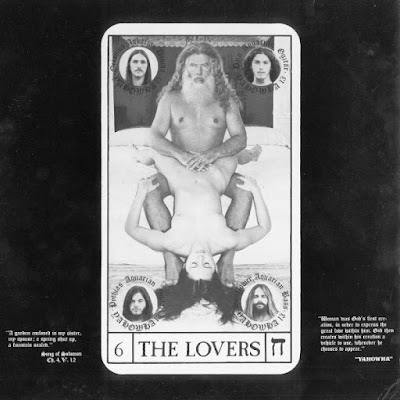 
Yahowa 13's previous two albums, particularly this one's immediate predecessor (Penetration: An Aquarian Symphony), were a substantial, even huge, improvement over their previous recordings. This was in large part because of the near-absence of Father Yod. So when Yod immediately takes to the mike to unleash his gristly groan-speak vocals at the beginning of the first track of I'm Gonna Take You Home, it's hard to suppress a moan. Much of the ground gained by Penetration is lost, the group -- whose spelling, for some reason, was changed to Yahowha 13 with the addition of an extra "H" -- sliding back into disheveled psychedelic jams, dominated by the crude philosophizing and even cruder singing of Father Yod. The band had developed into better players over the course of the previous LPs, and some of those peculiar talents are in evidence, such as Djin Aquarian's knack for odd psychedelic distortion, and tribal rhythms and gongs. There's only so much that can be done, however, in the context of Father Yod's rambling, tuneless songs. When he's not singing, in a manner of speaking, he's imitating a buzzing bee or, more palatably, whistling in an Ennio Morricone-ish manner. Tellingly, these five extended numbers have no titles other than "Track One," "Track Two," and so on, as a throwback to the Father Yod & the Spirit of 76 LPs, where tracks were simply identified as "Side A" and "Side B." The cover shot of a nude Father Yod in a position of copulation with a nude young woman ensured that the record would not be stocked by Woolworth's, which was hardly the intention of the band in any case.
Posted by Zen Archer at 12:48:00 AM