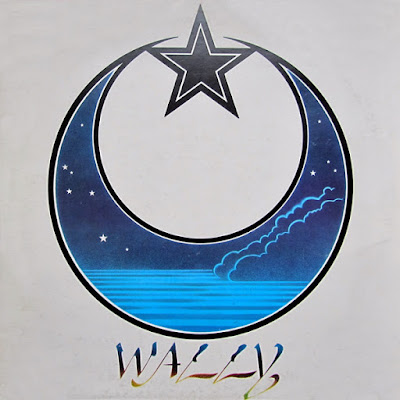 
WALLY is a strange band, they started playing some sort of Symphonic Country, which wouldn't be strange "per se" if they were from USA, but this guys were British and their debut album was produces by Rick Wakeman, so it's kind of unusual.

The band was discovered in 1972 when they reached the finals of a contest organized by the Melody Maker Magazine which was won by another band named DRUID. But they caught the attention of a judge of the contest called Bob Harris, who got them a contract with Atlantic Records, and with the support of Rick Wakeman co-produced their debut self titled album in 1974.

This album has a clear Symphonic sound, specially in the excellent "The Martyr" and the twelve minutes epic "To the Urban Man" with great Mellotron, but a good deal of Country music influence, more evident in songs as "I Just Wanna Be a Cowboy" that mixes some EAGLES sound, not an outstanding album, but solid enough, sadly it was a commercial failure.

Before they released their second album in 1975, Paul Gerrett leaves the band is replaced by Nick Glennie-Smith, with whom the release "Valley Gardens" in which they leave the Country sound behind and contains the best track they released, the epic "The Reason Why" which covered all side "B" of the LP.

Little is known after this release, but most people remembers them for their participation in the 1975 Reading Festival where they did a strong performance, despite playing with bands as YES, CARAVAN, WISHBONE ASH, SOFT MACHINE, etc.

As I said before, not the best band ever, but they were very good and deserve more recognition for being owners a unique sound.

While much of the sixties were marked by the British invasion of America and all points west and east of Liverpool, there seem to have been some points in time where the influences flowed the other direction, if only in isolated pockets. Wally are one of those rare examples of this phenomenon. Despite being a bunch of guys from Leeds they managed to spend five years in the seventies touring around under management of Brian Lane and sounding something like the Eagles fronted by Jackson Browne with a hillbilly fiddler in tow. That and two albums produced by Whispering Bob Harris and Rick Wakeman should have made them stars somewhere, but apparently things just didn’t work out. Probably because their prog heavyweight connections belied their true talent as a modern-day R&B band.
This music is about as progressive as most of what Wishbone Ash or Ambrosia or America or Firefall or Home ever put out, which is to say not very. But if you are one of those people who has fond memories of the mellow, country soft-rock that filled the AM radio airwaves from about 1973 through 1978 then you will find this stuff pretty appealing. In fact “Sunday Walking Lady” sounds an awful lot like Firefall’s “Cinderella” except with some whiny fiddle for flavor. And “I Just Wanna Be a Cowboy” reminds me of Home’s “Time Passes By”. Not complaining mind you, just a couple of observations.

I think they’re closer to being a folk band than a symphonic one anyway, but I suppose the mellotron, Hammond organ and harmonium manage to fool some people. The one track that stands out a bit is the fourteen minute “To the Urban Man” with its psych sound effects and guitar fuzz layered in with that same persistently whining violin. This is a fun tune to listen to but it is also the only thing on the album that approaches true prog music with the exception of the opening track “The Martyr”, an eight minute mostly instrumental flight of fancy that moves between prog and pop almost seamlessly.

There’s a guy named Paul Middleton playing pedal steel throughout the album which of course makes this sound even more like country music than it would otherwise, although it would otherwise anyway. For fans of this instrument his highpoint is the closing track “Your Own Way” in which he pretty much sets the tone for the whole arrangement with some nice sustains and an overall wispy autumn afternoon feel. Nicely done.

These guys would put out one more album before constant touring and lack of acclaim took their toll and the band broke up. Most of them stayed in music though. Roy Webber played in a band called Trader for a while before turning to a graphic design career. Today he is one half of a part-time mainstream act known as Jackson-Webber. Pete Sage owns a recording studio in Germany, and Paul Middleton became a sort of British version of John Forgerty – hermit-like with rare public appearances before resurfacing a few years ago fronting Paul Middleton & the Angst Band. Keyboardist Nick Glennie- Smith (who replaced Paul Gerrett around the time this album was recorded) was one of a host of musicians who played the Roger Waters Berlin Wall gig. Pete Cosker unfortunately died of drug-related causes in 1990.

These guys aren’t all that memorable for a reason – they didn’t exactly put out innovative or timeless music. But they did what they did quite well, and managed to record an album with a decent sense of continuity and some nice blues steel, which is something I personally enjoy. This is a three star effort in my mind, but be warned that it is not what is traditionally considered progressive and is certainly not symphonic. Prog folk fans will undoubtedly enjoy it though.