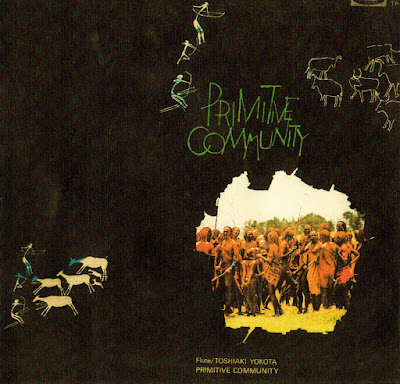 
What we got here is probably Japan's best kept secret. For somedays i was amazing myself listening this album over and over again. Toshiaki Yokota's "Flute Adventure" album is one of my favorite, and i was wondering "Primitive Community" like many others. Since album is private press, 300 copies were made, and since it costs some thousands; we wanted everybody to taste this delicious album. My regards and thanks goes to Toshiaki Yokota himself, to give me a chance to introduce this album to you. A real treasure for the lovers of 70s prog/fusion..

"Born in 1944 in Tokyo. Started his musical carrier at 17 years old. Led his own group 'The Beat Generation' and 'Primitive Community' for 10 years, as well as playing lead flute in Takeshi Inomata's Sound Limited. A pioneer of jazz flute in Japan. Now, He lives in Izu-Inatori and maintains his own studio with beautiful and magnificient sea view. There Yokota creates his original instruments taking nature for a friend. The instruments created by Yokota are mainly fue(Japanese flute or pipe),that is shakuhachi, ceramic flute,YAYOI-BUE and other original instruments of his own ideas. He has been doing several live performances using those instruments."

"Toshiaki Yokota and Genshi Kyodotai is at the meeting place of jazz and rock. That exciting time at the turn of the 1970 decade, long before what is commonly referred to as fusion, when the ambition of free jazz met with rock's exciting psychedelic nature. It wasn't important to display Berklee-trained chops, but rather it was about texture, atmosphere and creativity at its most radical. But fortunately it stops short of free jazz's reckless abandon - that point where it's just noise for the sake of noise. There is meaning to every note, instrument and pattern. As well, we get a peek-through-the-bushes look at a Japanese sacrificial ritual as described by the tribal drumming, Hammond organ shards, wordless monk chanting, Yokota's flute and Mizutani's acid fuzz guitar blazing a wah wah trail all to be one with Kami. And that's before we get to the Hare Krishna chorus. An album like this becomes mythical because it is mystical. It's in the same league of sixth dimensioners like Älgarnas Trädgård's "Framtiden Är Ett Svävande Skepp, Förankrat I Forntiden", Lula Côrtes e Zé Ramalho's "Paêbirú" or Pierrot Lunaire's "Gudrun". If Rolf-Ulrich Kaiser had heard this band, they would have been signed to the Ohr label on the spot...
Posted by Zen Archer at 6:31:00 PM