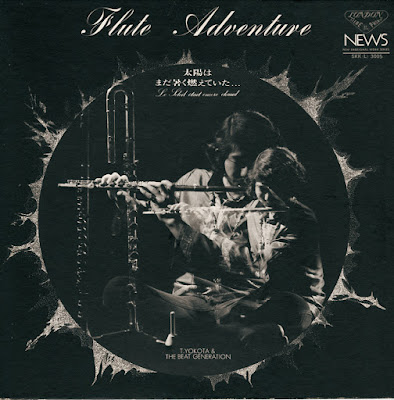 
I first heard about this Japanese album nearly 20 years ago, from a rarities catalog called Turbulence. Some of you old-timers I'm sure recall those great Greg Pawelko lists.  Greg stated it reminded him of Yatha Sidhra’s “Meditation Mass” or maybe some other underground Krautrock album from the great Ohr label. Well, I have to tell you folks - that most certainly grabbed my attention!

Except I never saw it listed again.

I began to doubt its existence after while, since no one ever claimed they knew anything about it. Part of the problem was that I had Mr. Yokota's name spelled wrong. I knew he was on the Love Live Life + 1 album (I always presumed he was the "+ 1" but I'm not sure of that). He was also a guest on Kimio Mizutani's excellent "A Path Through Haze" as well as Hiro Yanagida's "Milk Time". He was definitely embedded in the Japanese underground brain-scorched Rat Pack that's for sure.

So you can imagine my shock when I found out that "Flute Adventure" was not only out on CD, but a legitimate press on one of Japan’s major labels: King Records. This revelation of its existence came to me in early 2007 (the CD was officially released on March 7, 2007), to which I couldn't hand my money over fast enough. The funny thing is it was released under their "Jazz Swing" series. Uh, yea... that's what this is! Not.

"Flute Adventure" is exactly as was touted by Greg – a mix of flute based underground acid psych and ethnic woodwind journeys drizzled with a dash of cocktail lounge. So, yes, a little Yatha Sidhra, a little Bjorn J:Son Lindh, some Jeremy Steig, even a smattering of Herbie Mann – all through the Ohr label aesthetic of phased out monsters like Annexus Quam. And it’s a full band effort, not just an album with solo flute. No, this one has plenty of fuzz guitar and tribal percussion to add to the party.

Absolutely essential for the freakshow hidden deep within you.
Posted by Zen Archer at 6:49:00 PM