Sabattis
1970
Warning In The Sky 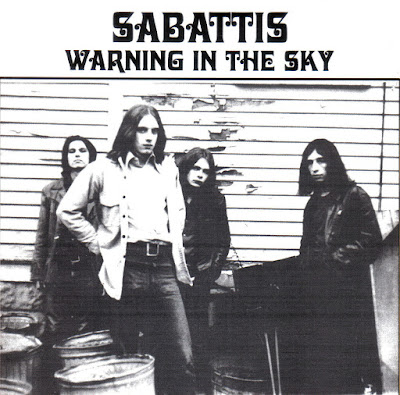 The music industry is a fickle bitch; a rocky road littered with the broken hearts, souls, and limbs of those trying to get to the Promised Land. Once upon a time — 1968 to be precise — in Rochester, a hard-rockin' psychedelic outfit called Sabattis came to be. The band members, all in their late teens, mirrored what was going on in music at the time with its exploratory darkness, picturesque lyrics, and loose renderings of tight arrangements. In its brief history, Sabattis shared the bill with other local bands like Rain, and The Red, White, and Blues Band, as well as national biggies like Savoy Brown. It made appearances at local venues like The Club on Gould Street, area high schools, and colleges and Highland Bowl where the band played for 10,000 fans. In 1970, the band landed in the studio to record seven tracks in the hopes of getting noticed and signed with a major label. But the labels didn't come a-knockin' and the band eventually fell apart. The end, or...

Enter vintage music aficionado and Saxon Studios capo, Dave Anderson. Anderson got his hands on the original tapes from band members and insisted on pressing it on his Jargon Records label as part of Jargon's Time Capsule Series. Some 40-odd years later you can finally dig Sabattis' "Warning In The Sky." It's got a heavy Grand Funk Railroad drive and feel, a churchy organ that calls to mind Deep Purple's Jon Lord, and guitar riffs reminiscent off early Alice Cooper without the pomp and camp. It's a swell slice of Rochester music history, and a reminder to young bands still in hot pursuit of that elusive golden carrot on a stick that it may take a while. The album is definitely worth the wait.

Us hard rock quartet recorded their only in March 1970 in New York,  but it remained unreleased until March 2011. Tight sound with sharp guitar and stunning organ. The recordings were transferred from a 1/4 Reel tape that had been dubbed from the original master tape. There are some tape drop-outs biss and warble issues from time to time, this because of the quality and condition of source material.
Posted by Zen Archer at 3:02:00 AM