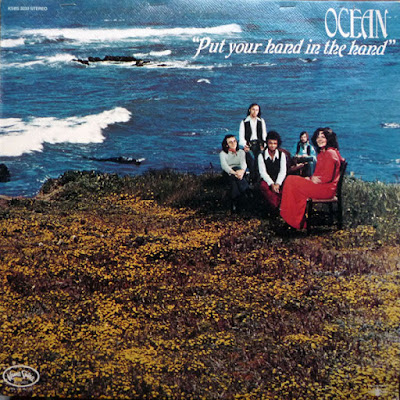 
This debut album by the Canadian band Ocean contains and was named after the bands' biggest single, "Put Your Hand in the Hand," that sold over one million copies in 1971 in both America and Canada. This gospel rock band comprised of Greg Brown (vocals, keyboard), Jeff Jones (bass, vocals), Janice Brown (guitar, vocals ), Dave Tamblyn (guitar), and Chuck Slater (drums) recorded in Toronto in the early '70s and originally released the debut album on the highly collectable Yorkville label in Canada. The album contained eight songs written by such notables as Robbie Robertson and Gene MacLellan. The album was picked up in the U.S. by the Kama Sutra label that also released the band's second album in both the U.S. and Canada. Ocean managed another hit in Canada with the song "I've Got a Dream" written by the British songwriting team of Cook and Greenway, but they failed to make any impact in the U.S. and disbanded in 1975 after only two albums.
Posted by Zen Archer at 2:39:00 AM