Moondog
1979
A New Sound Of An Old Instrument 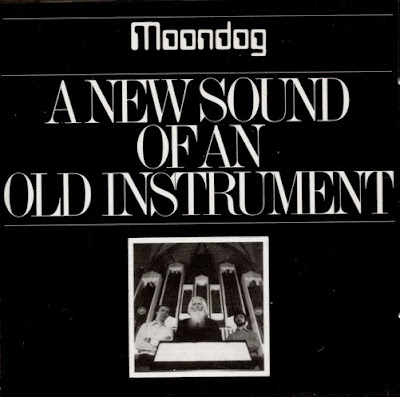 The organ has not been called the "King of Instruments" for nothing, because of all instruments it has the widestrange of possibilities lending itself to any mood or style. In suffering the organ to emit secular and even profane music, namey dance music, I do not find it out of place, since I am fully aware of the organ´s pagan beginnings, the pipes of Pan.
The organ is capable of producing a percussive quality, provided the notes are played staccato, and more importantly, if the "spitting" flute stop is used. This stop is also known as "chiff", having almost the jazz sound of saxophones playing staccato. Especially in a large room with good accoustics. I think an organ can do anything a jazz band can do, as good, if not better. Moreover, when it comes to long, sustained contrapuntal lines, the organ is unapproachable. The organ sounds good with or without percussion. I added percussion to most of the pieces, which are in the dance idiom.
Single Foot and Mirage are two "desert" pieces, written in scales suggesting Asia Minor. The drum beat in Single Foot represents the hoof beats of a horse at a gait known as "single foot", when each foot comes down separately, affording the easiest and most pleasant ride imaginable. I know this from my own experience, having ridden on a horse who had such a gait. It was owned by Bill Lucky, a famous trapper and hunter.
Frost Flower is named after the phenomenon occuring in the Antarctic, where frost sometimes rises in a shape suggesting a flower, as delicate and intricate as a snow flake.
I write logs with und without pedalpoints. All the logs in this album have pedalpoints. Log means canon, to me, at least. When a log is written over a ground, I call it logrundr.
A double 2-part log consists of two 2-part canons, each having its own theme, yet both fitting together, making quadruple counterpoint. Some of the logrundrs are in a-b-a form, in which case the b-part is a development, also in log - or logrundr form.
In 1938 I came across the old musical landmark, "Summer Is Acomin´ In". It made a deep impression on me. Forty years later I wrote, as a tribute to its unknown author, a musical answer to it, Logrundr in D. It is similar in form, having a ground consisting a 2-part canon in the pedals, over which is a 4-part canon for the hands. After a long pause the pedals begin the inversion of the whole piece with a lively version of the pedal canon in 5/4. The development is near the end, where the pedal theme is given to the hands in a double 2-part canon over a double ground. The piece ends on an expressive note, lingering over the opening figure of the main theme.
Logrundr in c has an interesting development, also in canon form, the theme of which is taken from the opening ground and transferred into a triple cross-rhythm of 3/8 with a feeling of 3/4 in 3/2 time.
The most ambitious development is in Logrundr in G, which is a drifter, which means that the canon drifts from one key to another before returning to the original key. The piece boarders on jazz idiom, and the pedal ground is percussive enough to carry the beat, without drums. The same is true of Log in b, the pedalpoint beat taking the place of percussion in this 5/8 piece. The development is a finger twister, no problem for Storfinger, however.

The composer Louis T. Hardin, also known as Moondog, was born in Marysville, Kansas 1916. He lived in New York for 30 years and has been in Germany since 1974.

The interpreters Fritz Storfinger and Wolfgang Schwering, two church- and concert organists from Oberhausen, West-Germany, record together on this album as a duo for the first time, having known each other and studied together since childhood.

Fritz Storfinger was born in 1951. He had his first church job, playing the organ for the service when he was 11 years old, even tough he had to play on tip-toe. From the age of 14 on, his organ playing made him financially independent. He studied at the Folkwang conservatory in Essen and graduated in 1975. He passed his concert examination in 1977. In addition to teaching and concertizing he studied conducting in Cologne.

Wolfgang Schwering, the only one of the three in the cover photo without beard, was born 1953. He won in 1966 the 2. prize in the competition "Jugend musiziert", after having piano lessons for 2 years. He began studying the organ 1965. He has been at the Folkwang conservatory since 1971, taking lessons in organ, cembalo and chambermusic. Since 1973 he has been the organist and choir-leader at Herz-Kirche in Oberhausen.

Both, Fritz Storfinger and Wolfgang Schwering studied in the master class of Professor Sieglinde Ahrens at Folkwang conservatory.


American composer, performer and poet Louis Thomas Hardin (1916 - 1999) - the figure is highly unique. In the history of music of the twentieth century it came under the alias Moondog. Not having received the profile of conservatory education (being 16 years old, in an accident lost his sight), this man throughout his long life's journey showed enviable resistance, courage and the ability to continuously grow over him. Self-mastered musical notation on a theory from books, typed in Braille, Hardin in the mid 1940s, arrived in New York, where for the next three decades, has gained the necessary experience as a street musician. The seriousness of the young man's ambitions, the facts show: starting from the forties, his jazz compositions written large variety orchestra. But the real fame came to Hardin in 1969, with the release of long play "Moondog", whose material is a progressive synthesis of jazz, psychedelia, folk and proto-art. Gradually Louis evolves master of avant-garde minimalist opus and the creator of modern classics. And in 1974 he moved to Germany, and there is continuing its stylistic experimentation ...
This CD presents the audience one of the most unexpected incarnation Moon Dog. "A New Sound of an Old Instrument " - a collection of twelve pieces for the cathedral pipe organ and percussion. You probably decided that our hero does not give rest laurels IS Bach? And here and there. Maestro Hardin once again shows the wonders of ingenuity and an entirely original compositional thinking. Under personal comments blind demiurge, developing a series of melodic majestic, the famous tool for centuries, it is repelled by techniques borrowed from jazz fields. Hence the maximum objective - as far as possible "liberate" organ pipes, fold hateful academic gloss and let the old as the hills, leaped unit, relatively speaking, staccato saxophone. To implement such an intricate mission Moondog drew a couple filarmonistov - Fritz and Wolfgang Storfingera Schweringen. With a choice of Luminary scene I was not mistaken: a promising duo successfully put into reality required. Thanks to the carefully painted mikrosyuzhetam gray-haired old man Homer, his imagination got decent skin imaginative: from the contemplative, smoking incense oriental motifs ( "Oasis, Op 11-1." , "Single Foot, Op 22-3.", "Mirage, Op. 11-3 "), mysterious minimalist narratives (" Bug on a Floating Leaf, Op. 11-4 ") and paintings of melting Arctic glaciers (" Frost Flower, Op. 78-5 ") to almost medieval canons (" Cresent Moon March , Op. 11-5 "), fantasy neoclassical studies (" Elf Dance, Op. 78-5 ") and large-scale, traditional sense of revelation (" Logrundr in G, Op. 76-23 "). . In short, quite an extraordinary series of maneuvers, forcing to look at a different angle on the nature of organ music
To sum up: a progressive rock release of the aforesaid relationship, of course, does not matter. But all who are interested in expanding their own intellectual horizons, I sincerely recommend to familiarize with the program. It's worth it.
Posted by Zen Archer at 7:40:00 PM