Moondog
1957
The Story Of Moondog 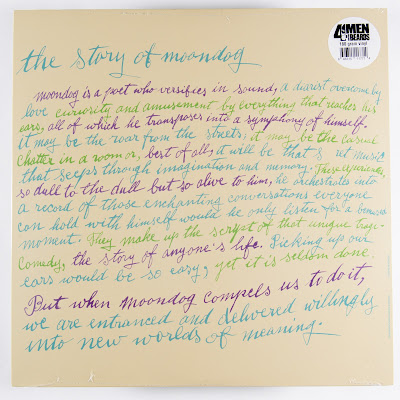 
One of the most colourful and at the same time most obscure figures in jazz, Louis Thomas Hardin a.k.a. Moondog in a way did to jazz what post-rock did to rock: infusing material from numerous sources, relying heavily on field recordings, and breaking up the established border of the genre. What's so impressive is that he did so already in the 1950s, at a time when jazz itself was still very much in development, and some time before avant garde artists like Ornette Coleman took hold.

Moondog's music is hard to classify: much of it is based on percussive instruments, and much sounds like obscure ethnic music from somewhere in the world, but not necessarily the streets of New York (specifically the corner of 6th Avenue and 54th Street, where he used to recite his poetry and made many of his field recordings that found their way on his albums).

Like all of Moondog's albums, The Story of is a fragmented mixture of impressions of various musical directions, hard to pinpoint yet overall consistent in its eclecticism. It seems like The Residents took more than a cue from Moondog in their own disjointed attempts at music.

Interesting and surprisingly accessible, even though it feels a bit arbitrary at times. This reissue on Honest Jon's replaces the original cover, which contained some of Moondog's philosophy ("Moondog is a poet who versifies in sound, a diarist overcome by love, curiosity and amusement by everything that reaches his ears, all of which he transposes into a symphony of himself..."), with a portrait of the artist later in his life.

Moondog's improvisations on instruments of his own design often sound ethnic and alien (a treasure chest of potential samples, to those in that trade), and make for novel but only fleetingly enriching background noise, like much street music. That material is the bulk of the album, and while I appreciate it to an extent, it's far, far outshined by the opening track, "Up Broadway". This is another side of Moondog, and one I strongly prefer: hypnotic, relentlessly syncopated, unorthodox, and yet very, very simple and repetitive ensemble jazz. I wouldn't be surprised if Philip Glass counted Moondog as an influence; a much more obvious descendant is Angelo Badalamenti's swirling, drunken "Jitterbug", written for the opening scene of Mulholland Dr..

Moondog's legacy as a bohemian icon may have been assured by his blindness, beard, and spear and magic helmet, but to me the music is what really matters, and to create such accessible and strictly non-virtuosic (yet strange) jazz in an era when bebop reigned supreme qualifies him as a weird and undeniable sort of reverse-innovator.
Posted by Zen Archer at 5:21:00 PM