Mirthrandir
1976
For You The Old Women 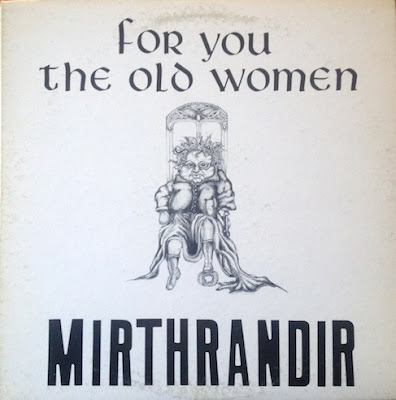 
Mirthrandir's roots go back to 1973 when New Jersey based drummer Robert Arace, keyboardist Simon Gannett, bassist James Miller, and lead guitarist Alexander Romanelli started jamming. Over the next couple of years the group when through a series of personnel changes, eventually expanding to a six piece with guitarist Richard Excellente and singer/horn player John Vislocky.

Unable to interest a major label in their wares, in 1975 the band decided to go the independent route, forming their own Mirthrandir label.  After extensive, five day a week rehearsals the band went into West Orange New Jersey's Vantone Studios recording 1976's "For You the Old Women".  As most folks would have probably guessed from the band name, these guys were interested in old fashioned progressive moves.  Exemplified by material like the opening instrumental 'Number Six' and the title track these songs were full of complex melodies, time changes and challenging arrangements.  These guys were exceptional instrumentalists with Excellente and Romanellin providing considerable octane with their twin lead guitars.  In the role of lead singer Vislocky had one of those high pitched pseudo-Geddy Lee-styled voices that you either loved or hated (though his performances tended to grow on you).  Interestingly while lots of reviews compared them to Genesis, King Crimson and Yes, I'd suggest Gentle Giant was a more accurate comparison.  Perhaps not a major point, but at least to my ears, like much of the Gentle Giant catalog, these guys weren't as shrill or outright experimental as Crimson or the Yes family of pretense.  Sure, tracks like the group penned 'Conversation with Personality Giver' were complicated and certainly wouldn't do much for garage rock fans, but by the same token these guys understood the concept of melody (check out 'Light of the Candle', or Gannett's synthesizer moves on the opening moments of the extended 'For Four').  That may also be one of the factors that made this an album that tends to sneak up on you.  For whatever reason, it's one I've transferred over to CD-R and occasionally play on rainy Sunday mornings.

America was a relatively minor contributor to 70's progressive rock, but even amongst the genre's short roster of American bands there were two well-established schools of thought.  There were those groups who found mainstream success by recasting British symphonic prog in a somewhat poppier, AOR-influenced light (Kansas, Starcastle), and then there were those groups who crafted challenging eclectic prog that owed as much to Frank Zappa or jazz fusion as to any British source (Yezda Urfa, Happy the Man).  Mirthrandir fall firmly into the later category, and as with many such bands they toiled away in obscurity before releasing a single ill-received record at the end of the prog era.  For You the Old Women is that sole release for this long-active New Jersey-based group, and is considered by many to be a leading "lost gem" of classic prog.  I'm significantly less enthusiastic about this release than many diehard progheads, but still recognize a surprisingly mature debut whose quality vastly outpaces its footprint.  Stylistically, Yezda Urfa is the clearest comparison for Mirthrandir's sound.  This means that they present a self-consciously difficult and occasionally quirky potpourri of British prog titans like Gentle Giant and Yes.  The album definitely runs toward the "eclectic" end of the prog spectrum and, although I'd never categorize it as experimental/avant prog, it's a chaotic mix of styles with numerous abrupt transitions.  Also unconventional are the vocal stylings of John Vislocky, whose strained tenor spends most of the album on the verge of falsetto-esque screeching.  An acquired taste to say the least, and a potential deal-breaker for many vocals-sensitive listeners.  For You the Old Women does deliver a handful of refined symphonic prog-inspired segments, especially over the slower-building instrumental bridges, but if you're looking for "epic-sounding" symph prog you'll probably be disappointed by the relatively hook-less nature of many of the themes.  On the flip side, lovers of challenging and occasionally discordant prog should be suitably impressed; amongst such fans, I suspect that For You the Old Women will stand alongside Yezda Urfa's Boris as a favorite of American prog.

Mirthrandir's eclectic style seems far better suited to extended tracks, seeing as they give the band the room necessary to flesh out their highly non-linear compositions.  "For Four", the album's fifteen minute closer, is the best demonstration of this and eventually delivers what is undoubtedly the finest theme of the album over its final three minutes.  The title track is another extended cut with a lot to like, but even on that track meanders around a bit too much for me to consider it a highlight.  Special kudos still go to that track's successful incorporation of horns, which tend to overwhelm many such compositions but here perfectly complement the complex keyboard/guitar leads.  The record's three shorter selections are just as hit-or-miss as the title track.  "Light of the Candle" is the best of the trio, mostly because its idiosyncratic melody is tied together by a noticeably stronger (some would say more generic…) guitar/organ groove.  That leaves "Conversation with Personality", which sounds like a more scattered rehashing of the title track, and the especially aimless instrumental "Number Six".  With an inconsistent track-listing and only one potential highlight in "For Four", I can't grant For You the Old Women anything more than a "merely good" rating of 3.0 stars.  "Interesting yet unexciting" is the most succinct way to describe my overall feelings. Nonetheless, For You the Old Women is still a nice acquisition for any seasoned prog rock fan, given that you actually get your hands on it.