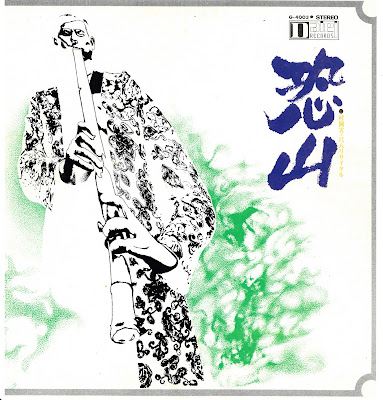 Minoru Muraoka was born in 1923,and began to studying shakuhachi  (=Japanese bammboo flute) officially in 1939.Later in 1959,he started to mix shakuhachi music with popular music.By playing with  Herbie Mann,a famous jazz flute plaer,in 1967,Minoru playing shakuhachi was known to  a lot of jazz fans.
The album is broken down in two parts. First part was named "Soul shakuhachi" and tracks they played were American blues songs, Bossa Nova,Japanese traditional songs ,rock music....and so  on.
Second part was named "New Dimension  " and the tracks they played were "Take Five""Come Together""Oiwake""Kawanakajima""Ma""Kobushi" and so on. And the last track they played was an epic "Osorezan".
In this album,"Osorezan"was the first track,but actually,was the last track at the concert.
In mid 70s,this album was released as the second edition with the different cover  .but one track called "Take Five"was deleted from the album.I don't know the reason.
Some of Minoru Muraoka's albums are very interesting to prog fans ,however , most of them are too difficult to get for us... hint hint... lol
Posted by Zen Archer at 4:44:00 PM