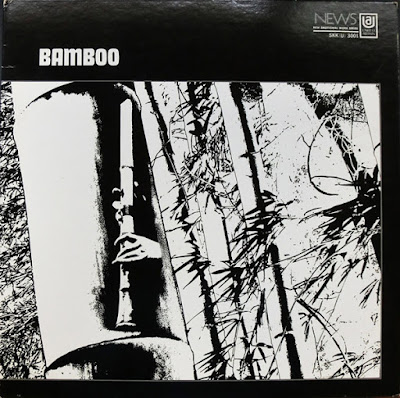 
Minoru Muraoka's little known 1970 masterpiece Bamboo is primarily searched out due to it's use by DJs (as are the majority of Japanese releases in this vein), but it's really a fascinating album if viewed through a post-colonial lens. Jazz in Japan has had an interesting history and in its early days (and even later) players were typically viewed by the familiarities in their sound such as Nanri Fumio ("Japan's Louis Armstrong). If jazz was brought to Japan by the American "colonizer" even before the post-War Occupation, it was artists like Muraoka who combined it with an indigenous sound. It was jazz artists like Sonny Rollins who suggested that Japanese artists combine jazz with their native music albeit in a way that may have been offensive. Bamboo, however, does just that. What's most interesting is that through the post-colonial lens, Muraoka is not creating an entirely native music, but rather a post-colonial brand of jazz infusing native instrumentations and songs with musical elements of the American colonizer. The album opens with a track that exemplifies this view with a cover of Paul Desmond's "Take Five," only with a slight twist. In lieu of an alto saxophone and a piano, Muraoka plays shakuhachi, a traditional bamboo Japanese flute, with his band members playing the koto (a stringed instrument) and tsu-tsumi (pitched drums). The version is true to the original only with a decidedly different palette of musical colors. The second track "Mogamigawa Funauta" is a traditional song which translates to "The Mogamigawa Boatman," which originates in the Tohoku region in northeast Japan. The song has a very traditional sound, however, the addition of the electric bass adds a definite Western quality to the song, however the sections with only koto and shakuhachi sound like what may have a been a traditional way to perform the song. One of the most fascinating tracks on the entire album is "The Positive and the Negative," which combines so many different stylistic elements that it would be hard to confine it to one genre. The shakuhachi and koto create a texture that sounds much like the latter track and very songlike, yet the bass and drum set create a texture reminiscent of funk. While this form of jazz may be much more "Japanese" than most, it's hard not to notice the effect of American popular music on this album. Even in trying create a decidedly Japanese brand of jazz, there are still elements of the "colonizer" in the music. However, that's not to say I'm trying to lessen the  accomplishments of the album's innovativeness in introducing Japanese elements to a style of music that originated in the West. It's the insight that the album gives to the musical cultural exchange and relationship of Japan with the West, that makes the post-colonial lens such a tempting frame of examination to use. The next track is a cover of the Beatles tune "And I Love Her," furthering the connection between Japanese and Western popular music. This tune also introduces another traditional instrument, the biwa (a plucked string instrument, which engages in a sort of call-and-response with Muraoka's shakuhachi. "House of the Rising Sun" begins with an unaccompanied shakuhachi intro that gives way to the organ outlining chords that give way to the tune and the melody in the shakuhachi. While "House of the Rising Sun" is a very old American sun, it's difficult to see the connection The Animals version with the presence of the organ and electric guitar. "Do You Know the Way to San Jose" is also a cover, but a very lighthearted one sounding almost Latin with the rhythmic accompaniment in the bass and snare. The organ in the beginning of "Soul Bamboo" is practically transcribed directly from "Blues, Pt. 2" from the Blood, Sweat & Tears self-titled album released only a year previously. However, once the whole band comes the similarity entirely ends. While remaining in the jazz-rock style so popular during these years, Muraoka creates a great original tune utilizing some of his virtuosic technical skills on the shakuhachi. The following track is "Call Me," a song originally a Petula Clark song, but made famous by Chris Montez. However, while the Montez version is in a pop style, Muraoka's version is in a bossa nova style made obviously by the samba rhythm in the drums and the pronounced articulation in the shakuhachi. "Scarborough Fair" is the final track, and while it isn't one of the stronger tracks it further highlights the album's mixture of East and West. While the music Muraoka is covering may not be entirely American, it's probably not wrong to assume that his original exposure to this music came from Japanese relations with America. This album is a great introduction to this style of Japanese jazz that incorporates traditional elements with jazz and popular elements. I highly recommend this highly sought-after album for both its musical and cultural significance.