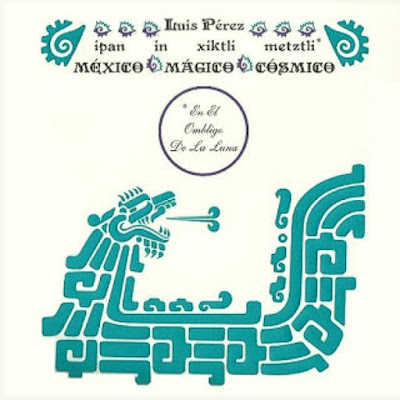 
The highly promising Sacred Summits label debuts with a reissue of Luis Perez's private-pressed cosmic obscurity, 'Ipan In Xiktli Metztli'. Beautifully recorded in Mexico, 1981, it offers a mescaline-sharp vision of deep grooving "cosmic ethnography" combining pre-Colombian percussion and wind instruments with electric guitar, tape delay and synths in free-roaming and extended suites. Perez's background in well-known (in Mexico, at least) folk ensemble Huayucaltia evidently feeds into this, one of only two known solo albums, but the key descriptor is blatantly psychedelic. The side opens with a pair of concise, light-footed groovers, all rattlesnake shakers and melodic percussive cadence rent upwards with astral wind instruments and richly evocative nocturnal atmosphere, seemingly preparing us for two extended trips coming off like a prime Jodorowsky soundtrack. The first, 'Etimología Del Nombre Mexico' projects ritualist prog grooves into a haunting soundsphere of synth swirl and chant awash with tape delay and riding the wave between lush ecstasy and abyssal darkness while the 2nd suite, 'Al Culto Solar' peers further still with truly desolate, shivering synth atmospheres pierced by a comforting voice which leads further into the "other" side and a phantasmic array of patterned basslines, demonic wail and utterly mind-blowing synth hallucinations. Serious stuff, treat with care for celestial rewards.
Boomkat

In the early 1980s, there was a small explosion of interesting and very unique progressive music coming out of Mexico. One of the paths being explored at that time was music that fused progressive music and ambient music with the instruments of pre-Hispanic Mexico; the sounds BEFORE the conquerors came and changed the continent hugely. The bigger names in the field were Suso Saiz and Jorge Reyes, but one of the first people to release a record that gained attention outside of Mexico was Luis Perez, who released this album in 1981.
"This tantalizing prospect of a label splashes down with an amazing LP first released by Luis Perez in 1981, originally within his native country of Mexico only. A kind of cosmic ethnography combining pre-Columbian percussion and wind instruments together with guitar, tape delay units, and analog synthesizers: a mystical weft of giddily deep grooves and experimentation. A limited edition beautifully presented in numbered, silk-screened sleeves, with notes."
Wayside
Posted by Zen Archer at 12:09:00 AM