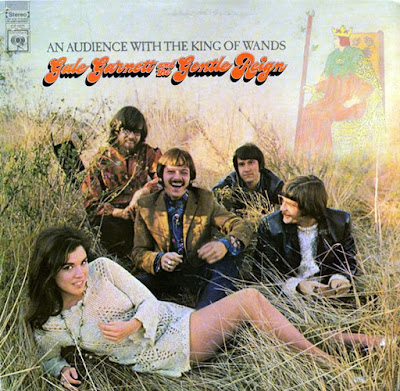 
This is an album I took a chance on based on cover alone. A foxy brunette surrounded by some hipped-out '60s dudes in a field with a ghostly image of a king and a Moody Blues-esque title? Sure, I'll bite. And I'm glad I did.
While spinning this for the first time, I did a little research on Gale Garnett. She cut her teeth as a folk artist early on, releasing albums throughout the mid-60s. She won a Grammy in 1965 for Best Folk Recording for her song "We'll Sing In The Sunshine" but never reached that level of commercial appeal again. Her later solo recordings incorporated more pop sensibilities than her earlier folk output.
On An Audience With The King Of Wands, Garnett, backed by her supporting band The Gentle Reign, brings in a mish-mash of influences to make a very interesting and varied record. Side A kicks of with the droning, raga-tinged "Breaking Through", a song that could have just as easily been on Jefferson Airplane's Surrealistic Pillow. Garnett has a beautiful low voice, not unlike Grace Slick, and it fits well on this track. Following this psychedelic jam is "Fall In Love Again" which could not be any more different than "Breaking Through". Gone are the LSD-tinged vibes, replaced by a groovy Swinging '60s joint complete with bursts of horns. I can almost picture some random Peter Sellers scene from I Love You, Alice B. Tolkas! The record is peppered with "mini songs", four sub-thirty second half thoughts, throwaways, really. Garnett and company drop the tempo for "Ballad for F. Scott Fitzgerald", a slow ballad that reminds me of a Rilo Kiley song. Garnett's deep voice is a perfect match here. It is not, however, a good fit on "Big Sur", a song that is as folk-rock as it comes, think Mamas and Papas, only not as good. The funny thing here is that Garnett appears to be poking fun of the hippy music she so obviously exploits in "Breaking Through". Another mini-song acts as a buffer before we get to "That's Not The Way", a blues-y rock tune that showcases Garnett's voice.
galegarnett2"A Word Of Advice" and "Believe Me" kick off the Side B and are nothing more than average pop songs. Not offensive, but not spectacular, they provide five minutes of forgettable music. After the third mini-song, Garnett returns to doing what she does best: using that deep, sexy voice to sell a song. "You Could Have Been Anyone" is sultry, plain and simple. Sure, it has that certain '60s feel to it, but that only adds to its appeal. The guitar work is sparse while the simple drum beat really adds to the overall mood. Garnett and the Gentle Reign  pick up the pace with "Bad News" another folk-rock song that adds some nice horns and harmonies, again reminiscent of the Mamas and Papas. Whereas "Big Sur" feels forced, "Bad News" is catchy and works well. Garnett hands over vocal duties for the Fred Neil penned "Dolphins", letting guitarist Bob Ingram take a crack at singing. Accompanied by just his guitar, Ingram does an admirable job but when you cover Neil, you have big shoes to fill. I actually prefer the guitar work on this version but Neil's vocals are far superior. An Audience ends with a mini-song.
Overall, this album is pretty good. Garnett has a great voice and when she picks the right songs, the album is fantastic. The problem is that there is no common theme. While I admire diverse influences, the album feels more like an artist and band trying to make a novelty, or even exploitative, album to cash in on the hippy, folk-rock scene. This is not to say that those songs are bad. They are certainly not ground-breaking, but they are catchy and kitschy. The real highlights, though, are the bluesy, sultry numbers like "Ballad for F. Scott Fitzgerald" and "That's Not The Way".
Posted by Zen Archer at 1:03:00 AM