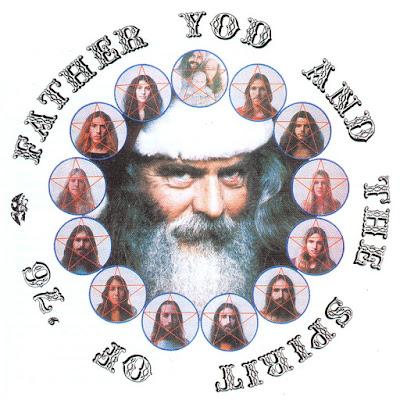 Like the previous Kohoutek, Father Yod's second album is divided into two side-long LP tracks titled "Side A" and "Side B," totaling about 25 minutes altogether. The difference this time around is that it's actually one 25-minute cut, split up into two LP sides. There's more of a funk-jazz lilt to the backing track too, with a prominent flute. The number, though, goes through a baffling number of transitions, from mid-paced groove to kinda crazed decadent psychedelia to hymnal gospel-rock with female backup vocals. Father Yod again sounds like a hopeless Tim Buckley acolyte in his roam from low moans to frenzied shouting. There seems to be a bit of a Doors influence in some of the organ and spoken narration of the later sections. Many of his lyrics, whether sung or spoken, are cringingly banal or ludicrous, improvised far-out observations -- "doesn't a light bulb burn the brightest before it goes out," "bring it into existence, you've talked a lot, let's do it," and the like. Probably this was executed with the utmost sincerity, but the result is, for the most part, an unintentional comedy record. One's tempted to suspect that the backup musicians -- all 13 of them, most using the last name "Aquarian" (Cinderella Aquarian, Sunflower Aquarian, Vibration Aquarian, and so forth) -- were humoring their mentor, or suppressing their embarrassed laughter. But, probably, they were not. Father Yod does flash an occasional sense of humor about the enterprise, as when he announces, "East will meet West, and then that will be that. About time, too," followed by the kind of squeal that Curly from the Three Stooges used to emit when something caught his fancy.
Posted by Zen Archer at 11:32:00 PM