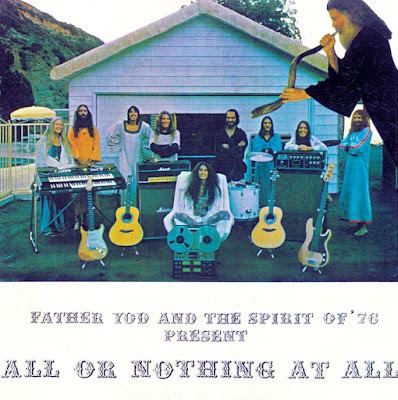 Although present on the album cover and credited by the Source Family, Father Yod does not perform on this LP.


If the eccentric-mesmeric psych rock project Ya Ho Wha 13 deserves the attention of all prog listeners, Father Yod and the Spirit of the '76 is just a curiosity for absolute fans of the guru and his spiritual tribe. Father Yod and the Spirit of the '76 is the first Father Yod musical incarnation. It features the usual gallery of musicians with the omnipresent and creative Djin Aquarian on guitars. This album has been published by the Source Family but curiously Father Yod is absent of the recording sessions. Moreover we can hardly perceive the influence of his auratic mystical splendor on the album. Conceptually his peaceful and enthusiastic philosophy is supposed to remain an inspired guide for the musicians. Musically speaking this is utterly disappointed. All or Nothing at all figures among the less interesting and less absorbing albums from Father Yod. To sum up things, it is a vague, passable collection of acid folk-ish songs with ponctual naïve pop accents and soft melodic airs. Father Yod's haunted-cathartic ceremonials and darkly lyseric psych jams have gone in order to let the place to standardised, mediocre and pseudo romantic hippie stuff

While there is no such thing as a typical Father Yod/Yahowa record, All or Nothing at All, the last album billed to Father Yod & the Spirit of '76, is probably the least typical. Father Yod himself, for the first time, did not appear on the record (although he's on the cover), and the haphazard psychedelic improv of the previous three Father Yod outings had vanished. Instead there was timid singer/songwriter soft rock, written and performed by various members of the Yod clan (both men and women), from the sound of things (there are no credits with the disc). The preponderance of piano ballads leads one to believe that Neil Young's "After the Gold Rush" was a serious hit around the Yod camp. There are also obvious shades of Carole King, Joni Mitchell, James Taylor, Elton John, and Imagine-era John Lennon. Should someone ever decide to do a rarities compilation solely composed of rejected singer/songwriter demos submitted to major labels in the early 1970s, it would probably sound something like this: well-intentioned, derivative, benign, and relatively uninspired. Only on the jolly-to-the-point-of-idiocy singalong "Party Song" are there traces of the mania characterizing the Yod/Yahowa output. It's undoubtedly the Father Yod/Yahowa effort that will appeal least to the psych-heads who covet their rarities. Conversely, it's probably the only one (with the possible exception of Savage Sons of Yahowa) that mainstream listeners could stand to hear without demanding that it be taken off the stereo.