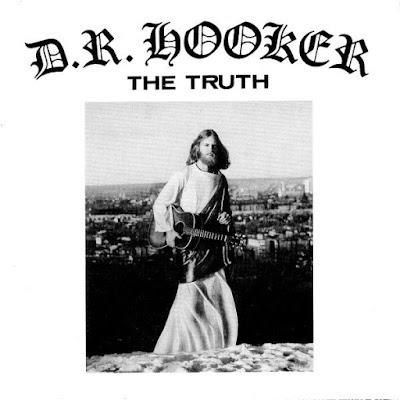 1 to 10: recorded at Dynamic Recording Studios, New Haven, Connecticut in 1972
11 to 16: recorded at Renaissance Studio, Maynard, Massachusetts, early in 1974 and originally released on the "Armageddon" LP.


Privately-pressed to a mere 99 copies, this may be one of the rarest records of all time. Not much has been discovered about Donald “D.R.” Hooker’s life, but the little that is known is pretty much summed up in one photograph, found on the cover of his 1972 album ‘The Truth.’ He’s pictured climbing over a rocky hilltop like a new-age Jesus, acoustic guitar in-hand, draped in robes, long hair and an ancient beard, looking like he’d just left a cult ceremony. The first lines of the record are: “I’ve been many places, and some I long to be.” It makes you wonder where he came from, and where he disappeared to. And moreover, why press only 99 copies of the album? With most record plants today requiring minimums of atleast 500, such an astronomically low quantity is relatively unheard of. In some cases, it might costeven moreto press fewer copies than the minimum. Even so, there being such an ungodly few original copies is part of what makes this album so interesting.

The year was 1972, in New Haven, Connecticut, and Hooker had reinvented himself from a substance-abusing hippy to an evangelical Christian. He had an entire album’s worth of arrangements written, but lacked a band. So he put together a ragtag bunch of local musicians for a few quick rounds of practice before diving into the reels of tape at Dynamic Recording Studios. By no means was it a band crafted to last. Their job was to play the parts that were already there and then take off, some of them never even hearing what became of the sessions. But each player turned out to be an amazing pick. The piano solo on ‘Fall In Love’ moves up and down the keys with ferocious speed. The rhythm section is tight, complex, and diversive. All Hooker had to do was sing along and strum his guitar.

There’s enough autobiographical light shone in the lyrics to get atleast a little bit of an idea of what Hooker was coming out of. The funky, percussive ‘Forge Your Own Chains’ reflects on his battle with drug and alcohol addiction: “Can’t dig what you’re doing, I won’t know you pretty soon. You’re thinking the hard stuff ain’t so bad, stick with it and believe me you’ll wind up sad.” Aside from the sweeping rock standards, there are songs that dip into moments of smooth, sensual balladry, making for perhaps the grooviest cuts on the record. ‘Weather Girl,’ for instance, is based around simple love lines like: “Everything changes when she’s near. Can’t see my troubles when she’s here.”

In the same way that Alfred Hitchcock’s ‘Vertigo’ retains its importance for pioneering camera zooming and panning techniques, Hooker’s album tampers with the possibilities of sound effects and recording tricks, like the oddly panned echoes in album opener ‘The Sea,’ or ‘I’m Leaving You,’ which may be the heaviest song you’ll hear this winter, fitting in somewhere between the Beatles’ ‘Sgt. Peppers’ and Black Sabbath’s ‘Paranoid’ (VMP’s featuredAlbum of the Monthin November, 2015). It’s as if Lou Reed was filling in for Jim Morrison at a Doors rehearsal, inspiring a more low-key, laid-back sound, yet remaining just as drenched in psychedelia. It’s the kind of “I-found-Jesus-and-you-should-too” album you could expect from an ex-junkie knee-deep in the spirit, but the music is simply too good to be cast aside as another forgettable Christian rock eye-roller. So good, in fact, that it almost entirely masks the religious undertones. His lines in the appropriately titled track “The Bible” read: “If they are knocking the bible, be sure that they are bent. Just see and you will understand, the book is heaven-sent.” The message is so straightforward that it makes David Bazan and Sufjan Stevens sound like athiestic child’s play.

In tripped-out Beatles fashion, ‘the Truth’ concludes with a recorded message played backwards: “Life is a mystery, of course it’s true. Look for the answer, recorded clues.” One can only assume that he’s yet again urging his listeners to turn to the bible, his holy source for “life’s recorded clues.”

‘The Truth’ has been reissued several times to make up for its limited debut, firstin 1993 by Del Val, thenin 1999 and again in 2008 by Sweden’s ‘Subliminal Sounds’label. Most recent wasa 180-gram reissueby Belgium’s ‘Veals & Geeks’ in 2015. The only US reissue since Del Val’s wasin conjunction with Scorpio, one of history’s largest and most prolific music rediscovery labels and distributors, who replicated the original release by ‘ON’ records. This isn’t an expensive album by any means, having been made widely available by these labels in several countries. Most copies can be found for around $20. But it’s the mystique of its writer and release that makes it intriguing. The Guardian featured the record in their long-running ‘101 Strangest Records On Spotify’ article in 2013, alongside some truly far-out digs: an 80’s synth album by Canadian stock broker “Lewis,” archival recordings by Mumbai’s Kesarbai Kerkar, or Alix Dobkin’s “by-lesbians-for-lesbians” folk album. Hooker is the very epitome of what it means to be a record collector, to come upon a piece of history that’s perfectly weird, near-impossible to find, but most importantly, excellent listening. It’s amazing to realize that some of those few original pressings could have survived all those decades and just be handed to us now. And the even bigger question: If something like this can last, what else might be out there? How many other lost albums could there be like this, waiting for the world to discover them again?

A second record, titled Armageddon, was planned but never saw a proper release. ‘ON Records’ compiled a series of demos and rough mixes recorded in 1974 that werepressed first in 1979, and again withScorpio in 2009. This second album was later reissued to have six of its eight tracks included with the ‘Truth’ debut. However you find it, though, you can count yourself lucky. Or maybe even consider yourself saved..
Posted by Zen Archer at 12:34:00 AM