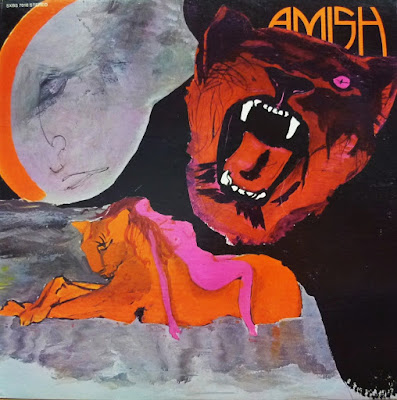 
Formed in 1970, Galt, Ontario Formed in 1970 from the remnants of the R & B cover band FJ And The Impressions which included bassist Mike Gingrich and organ player Ron Baumtrog.
Amish started out playing cover versions of McKenna-Mendelson Mainline, The Modern Rock Quartet, The Doors and James Gang songs.
The band’s manager, Bill Gefross, brought them to the attention of US label Sussex Records where Motown producer Dennis Coffey and Mike Theodore, both staff producers for Sussex, took the band into GM Studios in East Detroit to record. Guitarist Botts was a draft dodger from the Viet Nam War and couldn’t return to the United States to record so session guitarist Joe Gutz performed on the album instead.

Their self-titled debut was distributed through Buddah Records in 1972. The album contains a remake of Traffic’s “Dear Mr. Fantasy”. The original song “Down The Road” was intended as a 7? release with the non-LP track “Upon My Leavin’”, but the label never issued it.

After the album;s release, and a possible US tour, Amish merged with another Preston-Galt area band called Oasis and guitarist Bob Norris replaced Botts while drummer Kim Neil replaced Byrne.

Following the recording of a second album, but not released, Baumtrog left and Gery Mertz was brought in on keyboards. The band carried on for a couple of years, even as a 4-piece after the departure of Mertz.

Baumtrog is the Health & Safety Co-ordinator for Metokote Canada in Cambridge, Ontario; Mike Gingrich would play with Nightwinds in the late 1970s, Klaatu’s touring bassist from November 1981 until August 1982, The Headpins in 1983 and Holly Woods And Toronto in 1984; Doug Stagg passed away in 1999.


Excellent single album from, what was until recently for me, a hitherto unknown band from Canada. Stylistically, they could be compared to Phantom's Divine Comedy, a similarity especially enhanced by the vocalist (who also doesn't really sound like Jim Morrison). The guy has a great voice and range and is one of the main factors that raise the band well above their competitors. The guitar work and Hammond playing are very good and the whole album is of a very high standard. One cover is included, that of Traffic's "Dear Mr. Fantasy" but it is the original numbers which stand out. Extended listening only emphasizes the quality and I can heartily recommend it (especially if you like "dated" music - and to the unnamed reviewer - if you don't like Prog, which you clearly don't, why do you listen to, and subsequently review so much of it?).