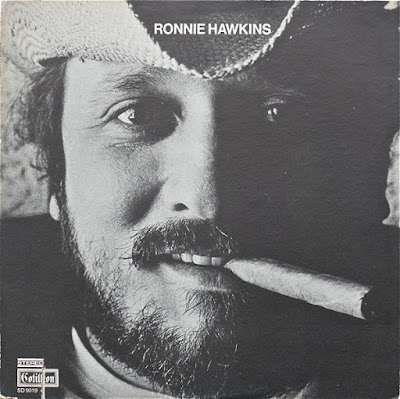 
Ronnie Hawkins is a rockabilly singer who formed his original backing band, the Hawks, while attending the University of Arkansas. After auditioning unsuccessfully for Sun in 1957, he started working regularly in Canada the following year, eventually taking up permanent residence there. After one release on the Canadian Quality label, he signed with Roulette in New York in 1959, having hits with "Forty Days" and "Mary Lou." The live fervor of Hawkins (known as Mr. Dynamo) and the Hawks' show continued in Canada after all the original members except Levon Helm headed back to the U.S. Hawkins quickly hired Canadian players Robbie Robertson, Garth Hudson, Rick Danko, and Richard Manuel as the new Hawks. They stayed with him until 1963, but later became Bob Dylan's backing group and went on to a career of their own as the Band. Hawkins has remained a legend in Canada, recording unrepentant rockabilly sides and gigging constantly. He's still the original Mr. Dynamo, capable of shaking the walls down any old time he feels like it.

On the heels of the Band's breakthrough, Ronnie Hawkins seized his tangential spotlight, signing to Cotillion Records in 1970 and recording this eponymous album. Produced by Tom Dowd and Jerry Wexler, Ronnie Hawkins is pitched halfway between rockabilly and the early dawn of progressive folk-country, with the Hawk singing two songs apiece from Bob Dylan and Gordon Lightfoot. Hawkins acquits himself well on this folkier material, particularly when it's pitched to a soft AM pop crossover audience as it is on the closing Lightfoot number "Home from the Forest," but that's more of a testament to Dowd and Wexler than it is to Ronnie. The singer really sounds best when he's tearing into '50s rock & roll classics -- "Matchbox," a truly gutsy "Down in the Alley," revivals of "Forty Days" and "Who Do You Love" -- and that leaves Ronnie Hawkins a bit off-kilter: oddly, the material that was meant to sound contemporary is what sounds dated and the tunes that were oldies in 1970 now sound liveliest.
Posted by Zen Archer at 2:53:00 AM