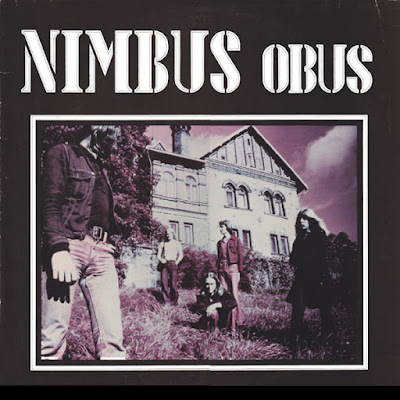 Nimbus, originally called Mafia, caught the interest of TASAVALLAN PRESIDENTTI bassist and Love Records producer Måns Groundstroem in 1972, and they made a 10-hour studio session in March 1973, but the session more or less failed. Later Love Records had no time for this minor band from Salo. Demos were succesfully sent to the small, non-prog-oriented label Satsanga Records (the one that later released also HAIKARA's controversial Iso Lintu album). The Finnish-language album Obus was recorded in just three days - and had no much marketing.
Nimbus' music is pure vintage-sounding Finnish prog/psychedelia of the early seventies, though surely not in the high level of TP or Wigwam, and featuring less of jazziness or eclectism. The circumstances weren't very favourable, and despite some warm reception among critics and especially the home area, Nimbus were destined to stay in the margin and to wither away within two years. I believe with the support of Love Records they would have reached much further.

'Ennustus' (= Omen) is a deeply atmospheric and psychedelic song with speech-approaching vocals. On this and some other tracks the keyboard player Pekka Rautio's brother Matti adds his violin to a great effect. The complex melodies and time signatures are even more fascinating in the next song. The band's warm sound with plenty of organ and electric guitar is really nice, and the vocals of Pasi Saarelma are pleasant, comparable to the sentimental vocals of British SPRING (or a cross between Finnish singers Kirka and Petri Pettersson).

Unfortunately the album is only about 33 minutes, and the six songs are quite similar on the long run. They all sound pretty good, but the song-writing - which lacks strong melodies and really memorable highlights - starts to lose its power during the album. The composer is the guitarist Harri Suilamo except for the final song 'Yksinäinen purjehtija' (= Solitary yachtsman) which is written by Pekka Rautio. It's perhaps slightly brighter and livelier in mood.
Posted by Zen Archer at 3:20:00 AM