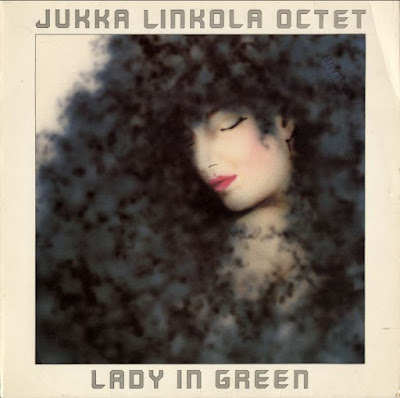 All compositions on this album were composed during the years 1981 and 1982 with the subsidy of the Finnish Government particularly for this line-up except for A3 which was originally composed for the play "Peer Gynt" performed at the Helsinki City Theatre and afterwards arranged for the octet.
The suite "Festival Movements" including the Big Band arrangements of the compositions B2, B3, B4 won the first prize in the competition for jazz compositions in Finland 1981.
This record has been produced by the support of the Foundation for the Promotion of Finnish Music.

Recorded at Finnvox Studios, Helsinki, May 1982.


Four years after "Proto-funk" they came back with another record that charts more squarely in the big band style-- even more reminiscent of the German group Noctett, by this time, even in Finland, fusion was probably a dirty word...

But I would like to feature it because of the awesome track called "Hawai'i."  Surprisingly, it's not all about ukulele strumming, circles of fifths, and diatonic ditties with major chords a la Don Ho and Tiny Bubbles.  Like the "Seven Sacred Pools" of Joachim Kühn (footnote: the natives make a point of saying they are not sacred, this is an inappropriate misnomer like calling the White House a sacred temple) it's a serious composition that evokes the verdure, the clouds, the beautiful birds and the fresh rainshowers that appear so suddenly but depart so swiftly.  For those who have been there, this is a place that stays in the heart forever, as Joachim and Jukka probably realized.

The minute you step off the plane-- passing through the open-air Honolulu Airport with its mahogany walls and numerous palms, you will smell the unmistakable thick subtropical wind full of orchids, rainforest and warmth, a smell you will never forget for as long as you live.  In Hawai'i you will do the dutiful tourist activites-- seeing the volcano on the big island, the longest continuous erupting volcano in the world, drive through the lush rainforests and stare, slack-jawed, at the plummeting cliffs going down to the ocean on the 'road to Hana', trek through jungles to see brilliant huge waterfalls falling hundreds of feet down into cold fresh pools, watch the championship level surfers on the North Shore of Oahu and be awed by their skills-- which took years of daily practice to master, make no mistake about it (I've tried it, and it's really hard), taste the wonderful abundance of seafood and hopefully try the magnificent fish called Wahoo, the name supposedly derived from the island name of Oahu, which the natives there call Ono (meaning delicious), maybe you will see the mandatory-touristy luau and watch the dancers-- but this is just a superficial tasting...

It's only when you've spent a few weeks there, enjoying the friendliness of the locals and their universal 'hang loose' hand signal, finding completely empty white sand beaches with gorgeous waters, walking hours along rainforest trails, swimming in secret ponds at the foot of waterfalls, visiting enormous valleys in the central parts of certain islands, as majestic as the Grand Canyon, that you will understand, really understand... Hawai'i is a paradise on earth, as close as we will get to experiencing Eden.  Then when you return home to the boring daily job of 30-40 hours a week you use to waste time and buy food until you get old and retire, having to deal with angry coworkers, upset clients, insoluble problems you are required to fix, the horrid cold in our Northern Hemisphere, driving past the endless suburbs of home depots, Starbucks, and Burger Kings to drive home late at night with no forest anywhere nearby, you will miss Hawai'i-- I guarantee.  And the more you go there, the more deeply you will miss it...

How you'll yearn to go back, like Gaugain to Tahiti, or Rimbaud to Africa, to hear the sweet music, to smell those gorgeous orchids, walk through the forests with grand three-hundred foot wide monkey pod trees, grander than the cathedrals the Europeans spent hundreds of years building, sit on a rock at the bottom and pass hours just watching the forest in its element...

With regards to the sample song "Hawai'i" notice how the woodwinds-- as usual I should say-- evoke the clouds passing by, or a flock of birds flying away, with their turbulent, arpeggiated style.  As well, using the 'polytonality' of D on top of the key of C (the tritonal F sharp in fact) here makes one think of mists, showers, water, etc., due to the layering of one chord on top of the other, as if a reflection in a pool of water.  A very composed track for sure from the hand of this master:
Posted by Zen Archer at 5:10:00 AM